Are We Called to Be Comfortable?

There's an issue plaguing American churches today - an issue of being comfortable. We've become comfortable with going to church from time to time, owning but not reading a Bible, maybe even comfortable being saved but not living for our Savior. Is this what the Bible says? Are we called to be comfortable? 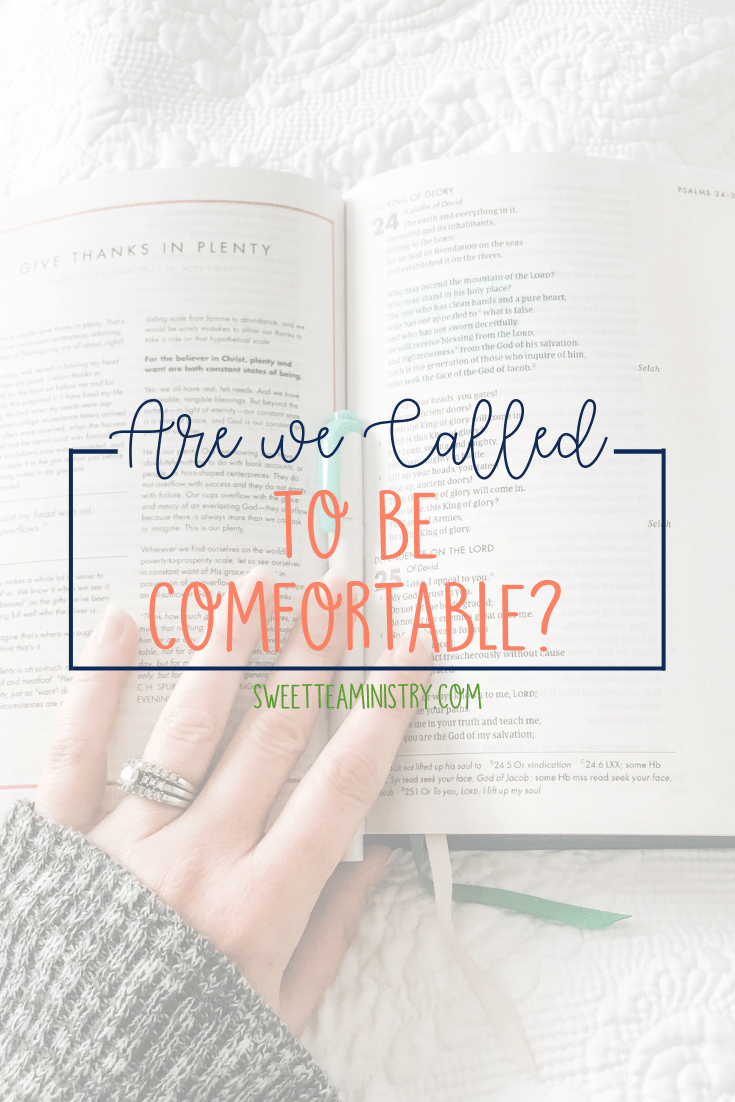 What does it mean to be comfortable?

That sounds about right. Here in America, we have freedom of religion. We don’t have to worry too much about being persecuted for our beliefs.

Sure, there are people who hate Christians, and they say so, but when was the last time you had to fear going to church because someone might kill you on the way? Probably never.

Churches are comfortable places to be, in most cases. They are air-conditioned in the summers, heated in the winters. You sit in comfortable chairs while sipping a warm cup of coffee, maybe even munching on a bagel, while listening to a preacher give you some uplifting message that will help inspire you for the week ahead.

No mention of sin or hell. No mention of the horrible things that happened to Jesus because of you and your sin. No judgment. Just a comfortable message.

When you leave, you feel good that you’ve checked a box on your weekly to-do list – you went to church. Yay!

Are we called to be comfortable?

Just like everything else, when in doubt, go to the source. If you look up “comfort” in the Bible, you’ll find a whole host of scriptures.

Even when I go through the darkest valley, I fear no danger for You are with me; Your rod and Your staff - they comfort me.

For this is what the Lord says: 'I will make peace flow to her like a river, and the wealth of nations like a flood. You will nurse and be carried on her hip, and bounced on her lap. As a mother comforts her son, so I will comfort you, and you will be comforted in Jerusalem.'

Those who mourn are blessed, for they will be comforted.

Praise the God and Father of our Lord Jesus Christ, the Father of mercies, and the God of all comfort. He comforts us in all our affliction.

It’s easy to read verses like those, and countless others, and take them out the context. You see, comfort is not a product of our faith. It is a reassurance after suffering, and strength to sustain.

I think this is where the confusion lies with many of us: we think being saved is a cure-all pill that should make life easier.

Jesus didn’t die on the cross for us to be able to have a shiny, happy life, free from pain and suffering. Nowhere in scripture are we promised happiness.

We are not promised that, once we accept Jesus Christ as our Lord and Savior, that life will become comfortable.

But we ARE promised comfort.

Go back and read those verses again.

> The Psalmist says that “even though we go through the darkest valley“, we can find comfort in God.

> Isaiah speaks of comfort after a falling away. Zion will be destroyed and its people killed and cast out of their land. But God promises to destroy their enemies, restore them to their land, and care for them as a mother cares for her son.

> In Matthew, during the Sermon on the Mount, Jesus speaks to the social outcasts – the meek and downtrodden – those who have suffered loss and pain, and assures them that they will find comfort in the kingdom of heaven.

> Paul, in his letter to the Corinthians, reminds them that mercy and blessings come from God. We will face affliction, but the comfort we receive is to be shared with others also facing affliction.

Being comfortable leads to being complacent.

When we allow ourselves to be comfortable in our faith, more often than not, it causes us to become complacent about our Father.

When we become complacent, we are happy to stay right where we are, doing the things we’ve always done.

We take for granted the easy access we have to prayer, to Bibles, to church. We don’t prioritize time with our Father because we take for granted the fact that He will always be there for us. We treat God like a magic genie or a “get out of jail free” card in Monopoly, instead of the Creator and Savior that He is.

We swoon over colorful Bible pages that people have artfully journaled and decorated, but we don’t study the words on the pages to build a relationship with the Author.

We get all dressed up and put on a happy face every Sunday, then Monday comes and we live a life we’d rather keep behind closed doors because of shame and guilt.

We hear messages from the pulpit of love and grace and mercy, then get irritated and short-tempered with our server at lunch because we had to wait longer than usual for our meal.

We know that Jesus died for our sins, but we continue living our sinful lifestyle and get angry when there are consequences for our actions.

We are called to be UNcomfortable.

After Jesus was resurrected, He appeared to His disciples and gave them what is now known as the Great Commission. It goes like this:

Jesus came near and said to them, 'All authority has been given to me in heaven and earth. Go, therefore, and make disciples of all nations, baptizing them in the name of the Father and of the Son and of the Holy Spirit, teaching them to observe everything I have commanded you. And remember, I am with you always, to the end of the age.'

The Great Commission wasn’t just for those 11 disciples – it was for all of us.

We are called to GO.

Go and make disciples. Go and share what Jesus has done for you. Go and live a life that points people to Jesus. Go and spread the news that God loves us, and no sin is too great for Him to wash away in His blood.

Jesus didn’t say to us, “Now sit down and relax. I’ve done everything for you. Would you like some coffee? Maybe a warm blanket? Prop up your feet, live a happy life free from pain, and I’ll see you on the other side when your long, incredible life is finished.”

Jesus told us to GO – to be uncomfortable for the kingdom.

What does being uncomfortable for the kingdom look like?

> Saul was comfortable being a murderer of Christians. Then he met Jesus on the road to Damascus and became the apostle Paul, founder of the early Catholic church, author of 13 books of the New Testament, and regarded by many as the greatest apostle of all time.

> Peter was comfortable being a fisherman. Then Jesus said, “Follow me,” and he laid down his net and became of disciple of Christ and one of Jesus’ closest friends.

> Mary was comfortable being a young girl engaged to her fiance, Joseph. Then an angel of the Lord appeared to her and she became the mother of Jesus Christ.

> Noah was comfortable being a husband and father. Then God told him to build an ark, and Noah became the father of a restored world.

> Abraham was comfortable being a father after many years of waiting, then God tested him by telling him to sacrifice his only son. Abraham obeyed, God saved his son, and Abraham became the father of the nation of Israel.

Moses, Ruth, Esther, Job, Joseph, David…on and on, we see ordinary people living ordinary, comfortable lives, then God showed up and told them to GO, be uncomfortable for the kingdom.

Therefore, since we also have such a large cloud of witnesses surrounding us, let us lay aside every hindrance and the sin that so easily ensnares us. Let us run with endurance the race that lies before us, keeping our eyes on Jesus, the source and perfecter of our faith. For the joy that lay before him, he endured the cross, despising the shame, and sat down at the right hand of the throne of God.

Yes, we will experience pain and grief and loss in this life. And yes, it’s easier to be comfortable and complacent in our faith.

But we are disciples of Christ, called to GO, to be uncomfortable for the kingdom.

When we keep our eyes on Jesus, we will have the strength and courage to endure whatever comes our way, no matter how uncomfortable it may become.

What Paul Can Teach Us About our Calling 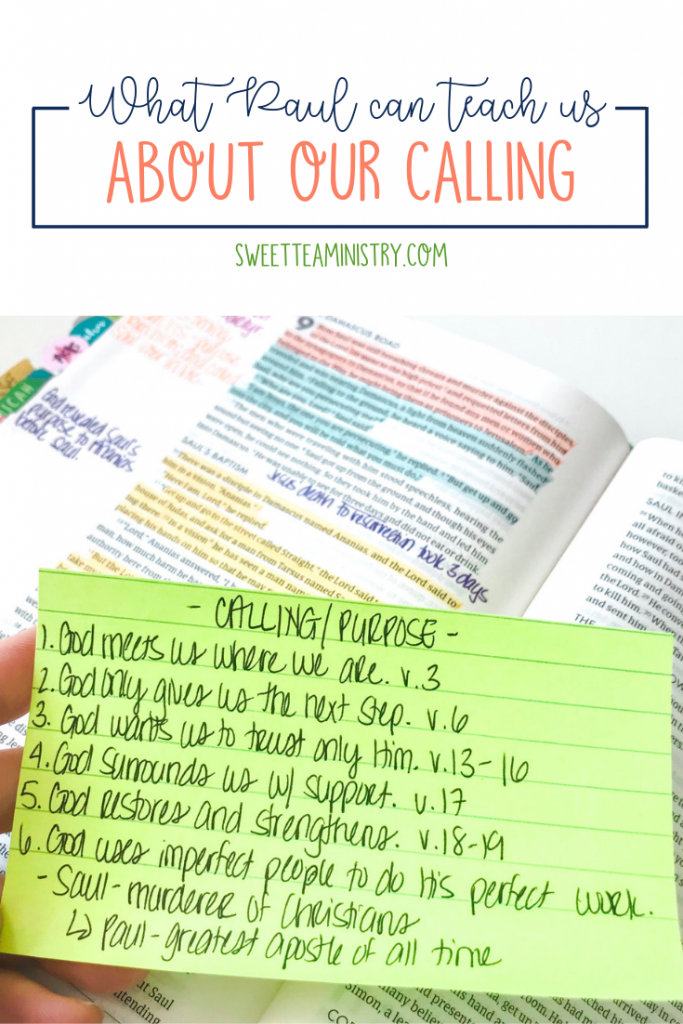