Dealing with Divorce – My Perspective – Part 2

Back in November, I shared my story of parenting through divorce, and the ugly history of my own situation.   At that point in time, my ex and I were wrapping up Parent Coordination.  For those of you who don’t know the story, here’s brief rundown: 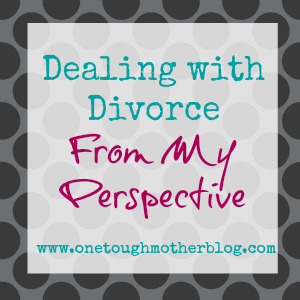 Now, I’ll quote myself here to describe Parent Coordination for those of you who have no idea:  “The judge ordered us to go to Parent Coordination, which is similar to marriage counseling, but for divorced parents.  Essentially, you pay a counselor to listen to the two of you battle it out in a confined space for about an hour and half every few weeks, in the hopes of finding common ground and improving communication.  Sounds fun, right?!”

So that happened.  And the surprising thing, to both myself and my ex, is the fact that, so far, it’s worked.  We completed our stint in Parent Coordination and have both been making a very valiant effort to remain civil to one another and honor our mutual agreement to keep the past in the past, and focus on our daughter’s future.

The past couple of months have been…well, interestingly peaceful.  Amazing things have happened.  To people who have never dealt with the negativity and stress and tension and pure unadulterated hate that can come with a nasty divorce, these small things may not seem so amazing.  But for a family who almost fell apart except by the grace of God (literally) during the worst years of our mess, these things are truly miraculous:

– My ex and I speak.  Like, in public, nicely, about non-daughter stuff.  Like normal people who don’t hate one another.  Occasionally, there’s even some laughter.  Honest.
– We can pick up the phone and talk to one another in a non-threatening manner about discipline issues, or school requirements, or behavior issues…without pointing blame or falsely assuming things about one another.
– Our daughter is allowed to take her own personal items back and forth between both houses.  There is no concern as to whether or not that item will ever be returned, because it’s hers, not mine or his.
– We compromise.  On pretty much everything.  Seriously.

If you would have told me six months ago that my ex and I would be able to attend school lunch with our daughter on her birthday – together – at the same time – and not fight, I would have thought you were insane.  But we did it.  And it was even better than just showing up and not fighting.  I brought cupcakes, we both sat with our daughter and shared laughs with she and her friends, we made casual conversation with one another, and all was well.

The best part of all of this, truly, is not the fact that I can sleep well at night because the stress is gone, or the fact that life is just easier to handle now.  The best part is the reaction from our daughter.  The pure joy on her face when she came around the corner at school on her birthday to see both of her parents waiting for her….something that has never ever happened before.

The other day, I picked her up in the afternoon from her dad’s house, and, as usual, when I arrived she wasn’t ready to go.  Her dad motioned for me to come in and wait inside for her to gather her things.  We stood in the kitchen and chatted for about 15-20 minutes, then Marley and I left.  When we got in the car, she paused, smiled, then said, “Mom, that was awesome.”

You have no idea how much that warms my heart.  I could sit here and beat myself up for the wasted years that her dad and I spent in anger toward one another, the regret that I should feel about the attitude I had toward him when I assumed he was doing things out of spite, or (to be completely honest) the rage I felt when I just heard his voice or saw his name pop up in my email for all those years.  But why waste more time on regret?  Yes, we wasted time with our daughter.  But that’s in the past, and we are focused on the future.

I said on my personal Facebook page the other day that my God changes “impossible” to “I’m possible”.  I firmly believe that.  God can do anything, including change hearts.  He can heal all wounds and mend the ties that have been severely broken and shattered.

To anyone out there going through divorce, or still dealing with the pain…whatever your situation is, please know that it really can get better.  I promise.

From someone who’s been there….

(To read the beginning of my story, go HERE.)