Genesis 2: Flesh of my flesh

The second chapter of Genesis serves as a further explanation of the Creation story in chapter 1, not necessarily the chronological next step. On Day 6 of Creation, God created man. Chapter 2 explains the details of this creation. 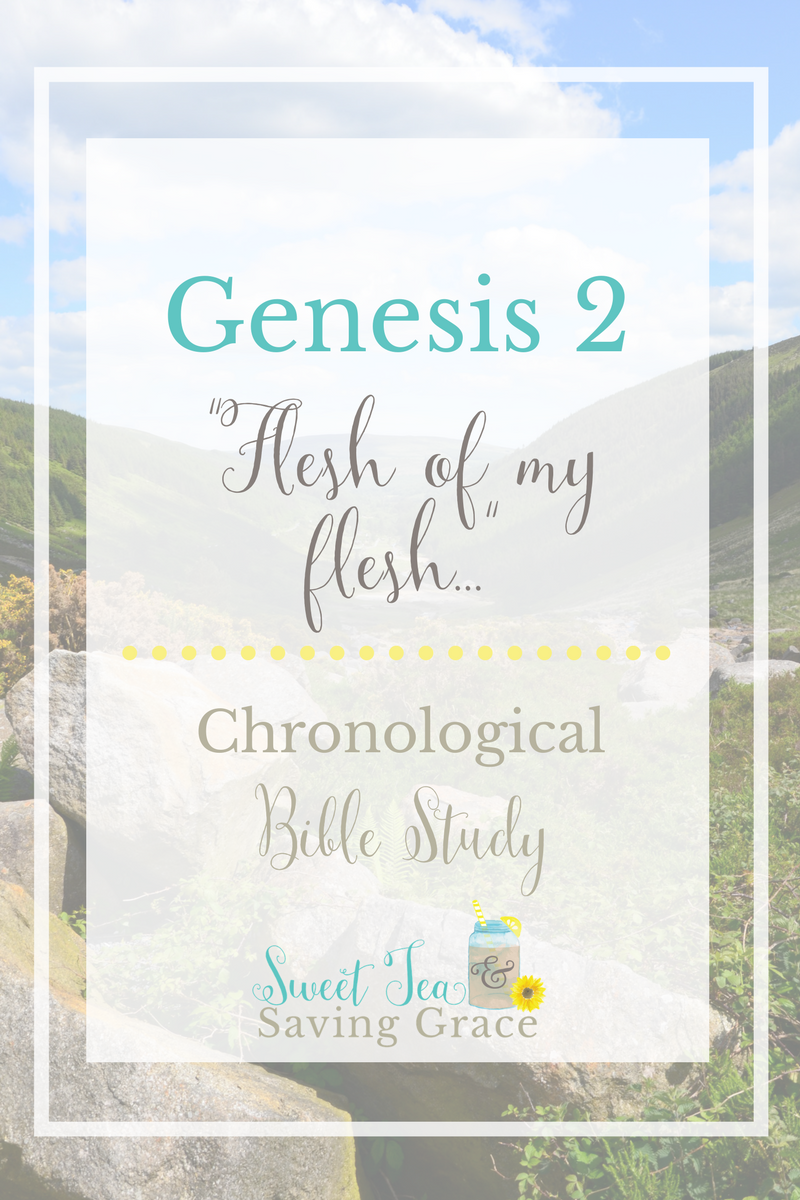 God has finished the creation of the heavens and the earth and everything in them. He is satisfied with His work and sets aside the seventh day as a day of rest.

This is the first time we see the number 7 in the Bible.

Source: BibleStudy.org meaning of numbers in the Bible

God set aside the seventh day as a day of rest and by blessing it and declaring it holy, He sets an example for man to follow.

God Referred to as “Lord God”

‘These are the records of the heavens and the earth, concerning their creation at the time that the Lord God made the earth and the heavens. ‘ Genesis 2:4

For the first time, we see God referred to as “Lord God”. In the first two chapters of Genesis, we are given two names for God:

Water as a Blessing and a Curse

‘But water would come out of the ground and water the entire surface of the land. ‘ Genesis 2:6

‘Then the Lord God formed the man out of the dust from the ground and breathed the breath of life into his nostrils, and the man became a living being. ‘ Genesis 2:7

One river splits into four river heads out of Eden. Geographically, Eden was probably located somewhere near present-day Syria, Turkey, or Iraq. However, the landscape changed dramatically after the Great Flood, so the exact location of Eden is unknown.

The Tree of Knowledge of Good and Evil

‘And the Lord God commanded the man, “You are free to eat from any tree of the garden, but you must not eat from the tree of the knowledge of good and evil, for on the day you eat from it, you will certainly die.” ‘ Genesis 2:16-17

Man was created with free will and the power of reason. Man was allowed to make choices. So why the temptation of the tree of knowledge of good and evil?

I asked this question myself and came across a great response from David B. Capes at Houston Baptist University:

The tree of the knowledge of good and evil was there, in part, to provide humans with a choice: to obey the Voice of God or not. Had there been no choice, there could be no obedience. The ongoing question for us is whether we will choose to follow, love and obey the One True God. Yes, I think God knew that some people would choose to follow. Others would choose to follow their own designs. That is not a failure in God but in us. Had God made us so that we could only love him, then it would be no love at all. Love is at the heart of creation.

It makes sense, right? God allows us to have free will, and designed us to desire a relationship with Him. However, He cannot truly know if we will be obedient if we have no choice but to obey because all other options have been removed.

God is our Father, and wants us to learn from Him that some things are evil, not from our own first-hand experiences. The Bible tells us:

‘Trust in the Lord with all your heart, and do not rely on your own understanding; think about Him in all your ways, and He will guide you on the right paths. ‘ Proverbs 3:5-6

Also, God tells man that if he eats from this tree he “will certainly die”. Death here is a spiritual death. By eating from this tree, man will have sinned. God cannot exist where sin exists, therefore man’s sin separates him from God and leads him to an eternal death separated from Christ in heaven, unless he repents.

God Makes a Complement for Man

For the first time, we see that God finds something as “not good”.

‘Then the Lord God said, “It is not good for the man to be alone. I will make a helper as his complement.” ‘ Genesis 2:18

In verses 19-20, God gives man the task of naming all the animals, and hopes to find a complement for man in the process.

Quick reminder: the act of naming things shows that man is the ruler over all living creatures on earth, as God intended.

Because no helper was found, God places man into a deep sleep, performs the first recorded surgery to remove a rib, and creates a helper from man’s rib.

‘So the Lord God caused a deep sleep to come over the man, and he slept. God took one of his ribs and closed the flesh at that place. Then the Lord God made the rib He had taken from the man into a woman and brought her to the man. And the man said: This one, at last, is bone of my bone and flesh of my flesh; this one will be called “woman,” for she was taken from man.  ‘ Genesis 2:21-23

The woman was made of a rib out of the side of Adam; not made out of his head to rule over him, nor out of his feet to be trampled upon by him, but out of his side to be equal with him, under his arm to be protected, and near his heart to be beloved. – Matthew Henry

God Sets the Groundwork for Marriage

‘This is why a man leaves his father and mother and bonds with his wife, and they become one flesh. ‘ Genesis 2:24

God intended man and woman to become one flesh in marriage, which refers both to the sexual relationship of husband and wife, and to the coming together of two people to create one union.

No Shame Because No Sin

‘Both the man and his wife were naked, yet felt no shame.‘ Genesis 2:25

Both man and woman were aware of their nudity, but were not ashamed. There was not yet any sin, so they had nothing to fear, nothing to hide from the Lord.

Clothing now has cultural significance, and in many cultures represents classes. Nudity is used as a form of shame and punishment in many cases, while clothing can be a status symbol and sign of wealth.

PrevPreviousGenesis 1: In the beginning God…
NextGenesis 3: The Fall of ManNext