Genesis 5: The Line of Adam

Genesis 5 is one of those chapters you may skip over or breeze through because it seems like just a lineage from Adam to Noah. However, there is much that can be missed if you don’t take the time to dig into these simple verses. 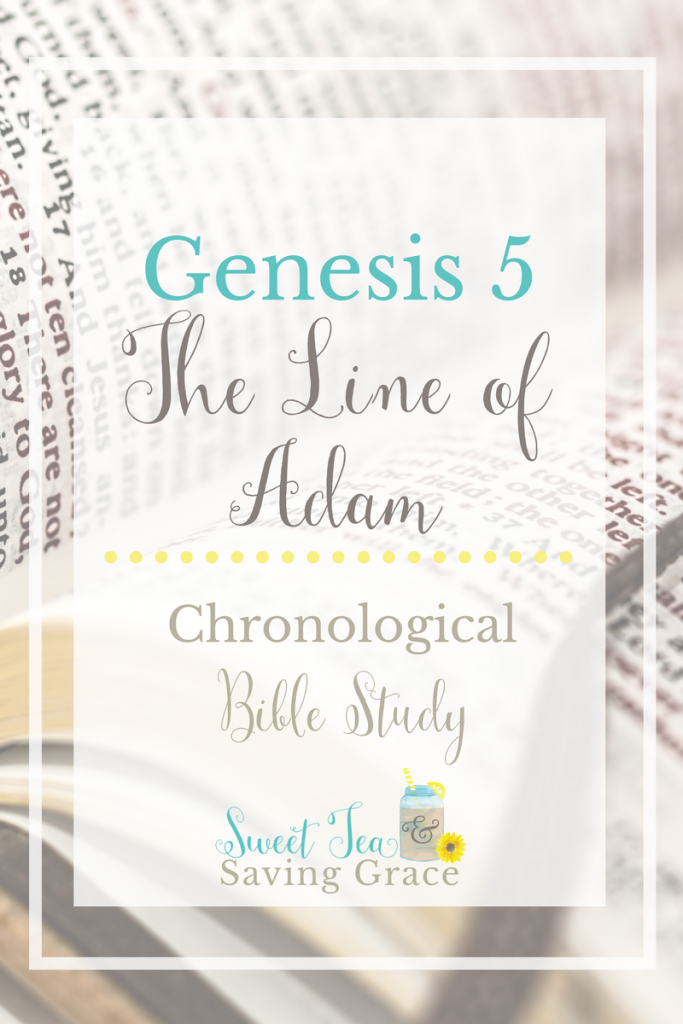 ‘These are the family records of the descendants of Adam. On the day that God created man, He made him in the likeness of God; He created them male and female. When they were created, He blessed them and called them man. ‘ Genesis 5:1-2

The Line of Adam through Seth

When we left off at the end of Genesis 4, Adam and Eve had given birth to a son and named him Seth. In Genesis 5, we see the line of Adam through Seth, rather than through Cain. These verses bear stark contrast to the lineage of Cain, which dead ends at Lamech, a polygamist and murderer.

Seth’s lineage, however, leads to Noah, who becomes the father of the human race after the flood, and ultimately leads to Jesus.

In verses 1-2, we see a repetition of the words used in Genesis 1: 26-27 (“likeness of God; He created them male and female….blessed them and called them man.“) This is possibly meant to reiterate the fact that Seth’s descendants will fulfill God’s purpose for mankind.

This is the line of Adam:

More on Enoch, Methusaleh, and Lamech in a minute.

“And Then He Died”

Eight times through Genesis 5, we see “and then he died” in reference to each of the descendants of Adam, including Adam himself: Adam, Seth, Enosh, Kenan, Mahalelel, Jared, Methusaleh, and Lamech.

Even though the line of Adam through Seth is the line that will fulfill God’s purpose for mankind, we are reminded of the punishment for sin – death. Over and over again, we see how each man, despite their relationship with God, dying.

Except for one – Enoch.

Enoch walked with God, which tells us he was a righteous man who had an intimate relationship with God, more than any other person listed in the list of descendants. He was so righteous that God spared him from death, simply taking him away. He was most likely a prophet, as referenced in Hebrews.

‘By faith Enoch was taken away so he did not experience death, and he was not to be found because God took him away. For prior to his removal he was approved, since he had pleased God. ‘ Hebrews 11:5

It’s interesting to note that Enoch was the seventh person in the line of Adam. Seven, as we know by now, is the number of completion and is used repeatedly in the bible. We’ll see it again in this chapter. (The seventh in the line of Cain? The sinful man Lamech.)

There is only one other instance of someone being taken, rather than dying, other than Jesus. In 2 Kings 2, Elijah was preparing Elisha to succeed him and he was taken.

The Oldest Man for a Reason

It’s always been a bit of trivia to know the name of the oldest person in the bible, but until I studied this chapter, I never realized there was a reason behind his old age.

Methusaleh lived to be 969 years old. He was the son of Enoch, the prophet who was taken to avoid the punishment of death. Then Methusaleh fathered Lamech who fathered Noah.

Let’s do some math: Methusaleh was 187 years old when Lamech was born. Lamech was 182 when Noah was born. And if we fast forward to Chapter 7 of Genesis, we see that Noah was 600 when the flood started.

So maybe God allowed Methusaleh to live until the flood began to serve as a sign to those living in sin. He was Enoch’s son, after all, and Enoch started walking with God after Methusaleh was born.

The Tale of Two Lamech’s

If you remember in Genesis 4:18, we were introduced to a man named Lamech, a descendant of Cain. Cain’s descendant Lamech as a sinful man, arrogant, violent, and boastful.

In Genesis 5, we meet another Lamech – the son of Methusaleh, and the father of Noah.

‘Lamech was 182 years old when he fathered a son. And he named him Noah, saying, “This one will bring us relief from the agonizing labor of our hands, caused by the ground the Lord has cursed.” Lamech lived 595 years after Noah’s birth, and he fathered other sons and daughters. So Lamech’s life lasted 777 years; then he died.‘ Genesis 5:28-31

Are you reading along and enjoying this study so far? I’d love to hear your thoughts and insights into what we’ve studied.