Holy Week is the period of time beginning with Palm Sunday and ending with Easter Sunday. It is a time to reflect on the events that took place leading up to, and including, Jesus' crucifixion and resurrection. To make Holy Week more meaningful, I've put together daily Holy Week Readings and Activities that you can use on your own or with your family. Jesus, His disciples, and Jews from every tribe were entering Jerusalem to celebrate the Passover Festival, one of three annual religious festivals that brought all of the Jews back to the Holy Land.

The Passover Festival marked the celebration of God freeing the Israelites from the bonds of slavery, ending 400 years of servitude to Egypt when they were brought out by Moses. On the night of the Passover, the Lord sent the angel of death to Egypt, killing the firstborn male of every living being – whether man or beast.

The Israelites marked their doors with blood from a pure lamb, and the angel of death passed over their homes, sparing their lives.

On this particular Passover, Jesus would be the lamb that would be slain, solidifying our eternal life with Christ and the ultimate payment for our sins. 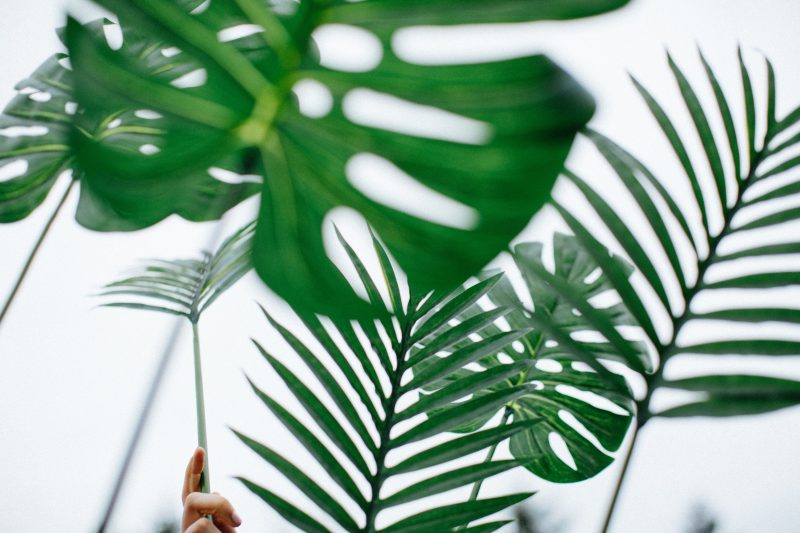 Palm Sunday is the day that Jesus made what is known as the “Triumphal Entry” into the city of Jerusalem.

It was marked by Jesus riding on the back of the foal of a donkey, fulfilling prophecy, and Jews waving palm leaves and laying their clothes on the road to usher in their Messiah. This was also the time when the Pharisees decided Jesus must die.

The account of Jesus’ triumphal entry into Jerusalem is told in all four of the gospels:

The prophecy Jesus fulfilled by riding the colt of a donkey into Jerusalem can be found in Zechariah 9:

Rejoice greatly, Daughter Zion! Shout, Daughter Jerusalem! See, your king comes to you, righteous and victorious, lowly and riding on a donkey, on a colt, the foal of a donkey.

The Palm Sunday Printables provide you with two large palm leaves that can be printed and cut out. Print as many copies as you like.

You are also provided with two coloring pages. While your children color, read the scripture passages to them to remind them why we celebrate. 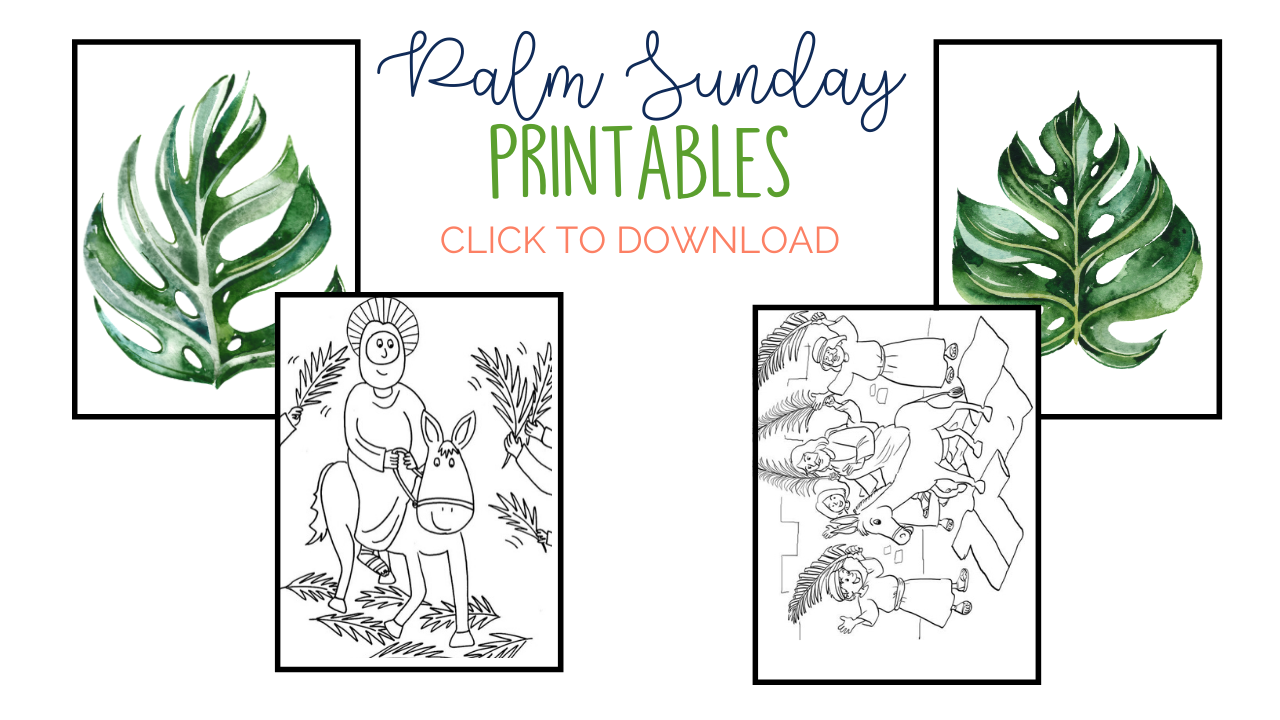 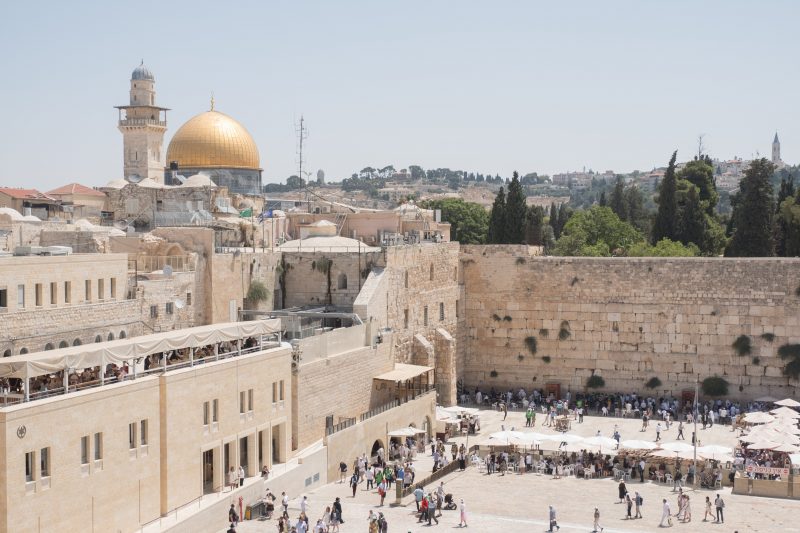 On Holy Monday, Jesus returned to Jerusalem after spending the night outside of the city (most likely with His friends Mary, Martha, and Lazarus).

He entered the temple and saw business being conducted there – money being changed and sacrificial animals being sold. People were profiting off what was supposed to be a religious celebration.

Jesus was infuriated by the events taking place in the holy temple. He became so enraged that He overturned the tables of the money changers and threw out the people selling sacrificial animals. He was astonished at the level of corruption that had made its way to a sacred place.

As you read through the scriptures for Holy Monday, journal about things in your own life or community where you see that sin has become commonplace. Often times, it slips in quietly, and becomes familiar, but sin is still sin, even if most people accept it.

Pray, asking God to help you overcome this sin that has crept its way into your life and community, and think of practical ways you can overcome it. 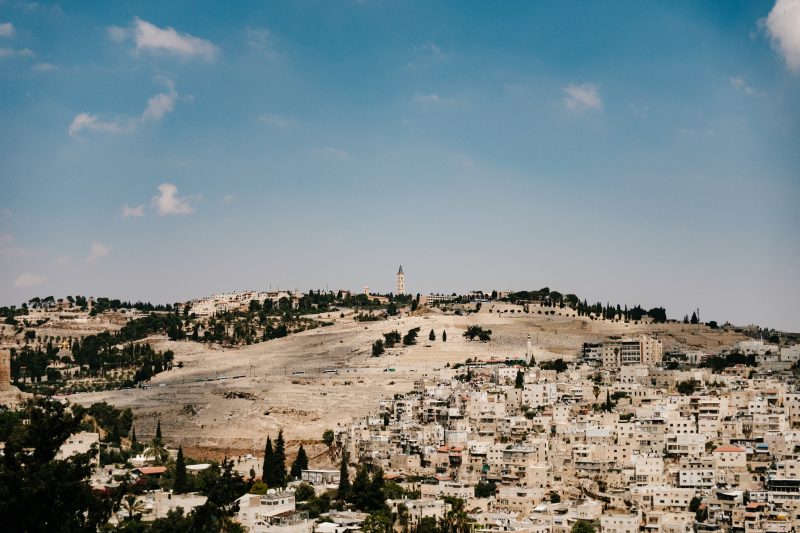 Tuesday was an eventful day. In Jerusalem, the Pharisees attempted to arrest Him, angered because He was establishing Himself as a spiritual authority.

Jesus and His disciples went to the Mount of Olives, where Jesus prophesied about the destruction of the temple. And Judas agreed to turn Jesus in to the Sanhedrin.

The events in Jerusalem, as well as Jesus’ prophecy of the destruction of the temple and the end of the age, can be found in the gospels.

In Luke 21:1-4, Jesus tells about a widow who had almost nothing, yet gave everything she had to the Lord.

Today, find a way to help someone in need. Ask God to put someone on your heart that may need help. Some ideas may include: 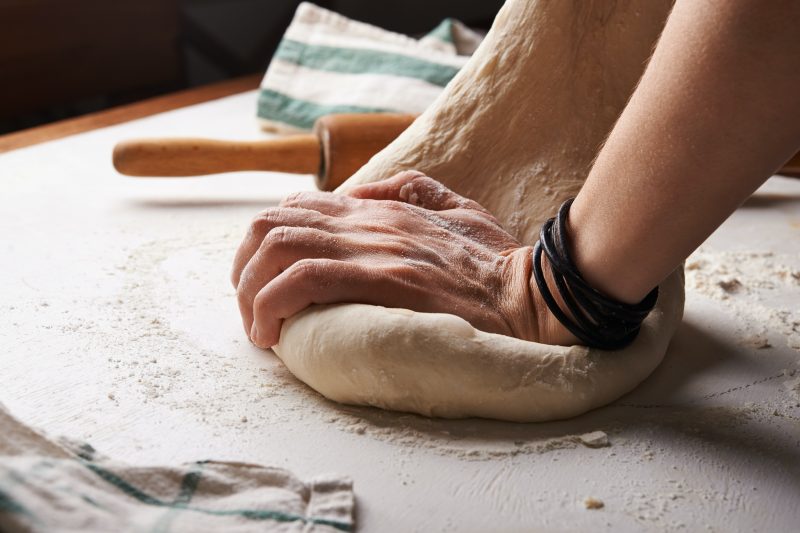 There isn’t much in scripture that we know about Holy Wednesday. In all likelihood, this was a day of rest for Jesus and His disciples, a day to prepare their hearts for Passover that would come the following day.

More than likely, Jesus and His disciples continued to stay at the home of Lazarus, Mary, and Martha in Bethpage.

There was no documented activity on this day in scripture. However, take time today to read the story of Lazarus and Jesus raising him from the dead.

In preparation for Passover on Thursday, spend today making unleavened bread. This is the bread that is used for communion, commemorating The Last Supper. 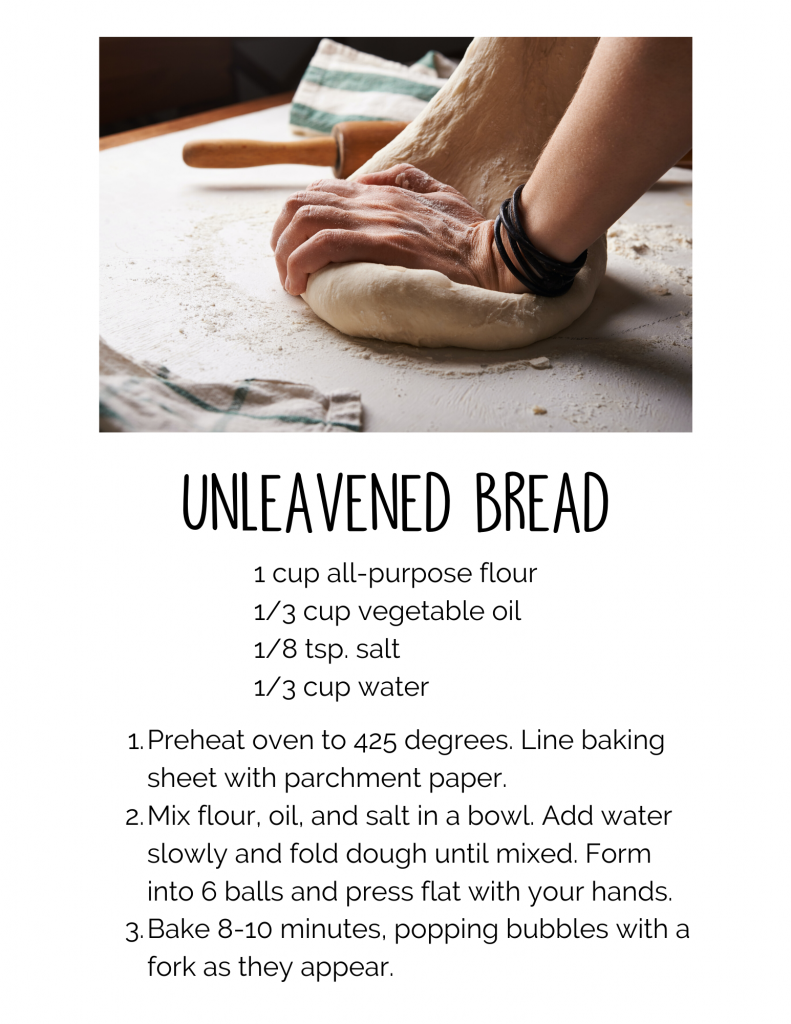 Mix oil, flour, and salt, then slowly add water while kneading the dough. 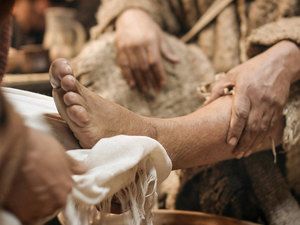 Today is Passover. Peter and John prepare a place to celebrate the Passover Feast together. Jesus washes His disciples’ feet before the meal.

Jesus serves the first communion, breaking the bread and pouring the wine.

Finally, Jesus is arrested in the Garden of Gethsemane.

A lot takes place on Passover Thursday. Jesus sends Peter and John ahead of the other disciples to prepare the Upper Room, where they will all have the Passover Feast together.

When arriving in the Upper Room, Jesus proceeds to wash the feet of His disciples, telling them that He did not come to be served, but to serve. He then served the first communion, the Lord’s Supper.

It is during this time that He declares one of them would betray Him, knowing already that Judas Iscariot had made a deal with the Sanhedrin.

Later, while praying in the Garden of Gethsemane, Judas arrives with the Roman soldiers and arrests Jesus, kissing Him on the cheek to signify which man to arrest.

After reading the account of today’s events with your family or to yourself, take time to quietly wash one another’s feet. Read John 13:1-17 as you do this.

Afterwards, light candles, and read Matthew 26:26-29 while serving the unleavened bread and the wine or juice, symbolizing the body and blood of Jesus. 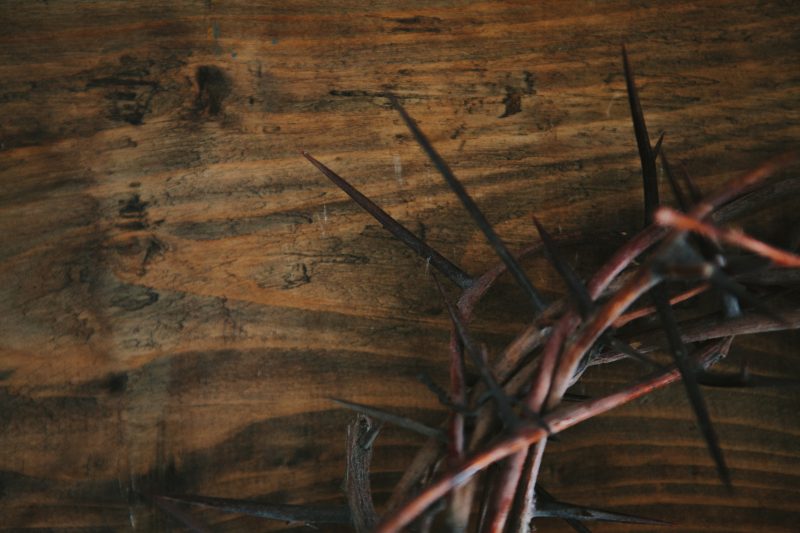 Jesus was brought before Pilate today, convicted as a criminal, and sentenced to death by crucifixion.

He was beaten, mocked, spat upon, and then nailed to a cross between two criminals, where He eventually died for our sins.

The veil was torn. The earth quaked. The sky darkened. It is finished.

The account of today’s events are difficult to read, but important for us, as believers, to remember the sacrifice that was made because of our sin.

Set alarms or reminders for 9am, 3pm, and 6pm. Read from one of the scripture readings at each time and thank God for His sacrifice and our salvation.

9am: This is the time when Jesus was being convicted, mocked, and beaten, made to carry His cross on an already broken body, up the hill to Golgatha, where He would then be nailed to the cross and left to die.

3pm: The ninth hour, when Jesus said, “It is finished.” He breathed His last breath, dying on the cross.

6pm: Nicodemus and Joseph of Arimathea, both members of the Sanhedrin but devout followers of Christ, took Jesus’ body from the cross, wrapped Him in cloth, and placed Him in a tomb until He could be properly buried after the Sabbath. 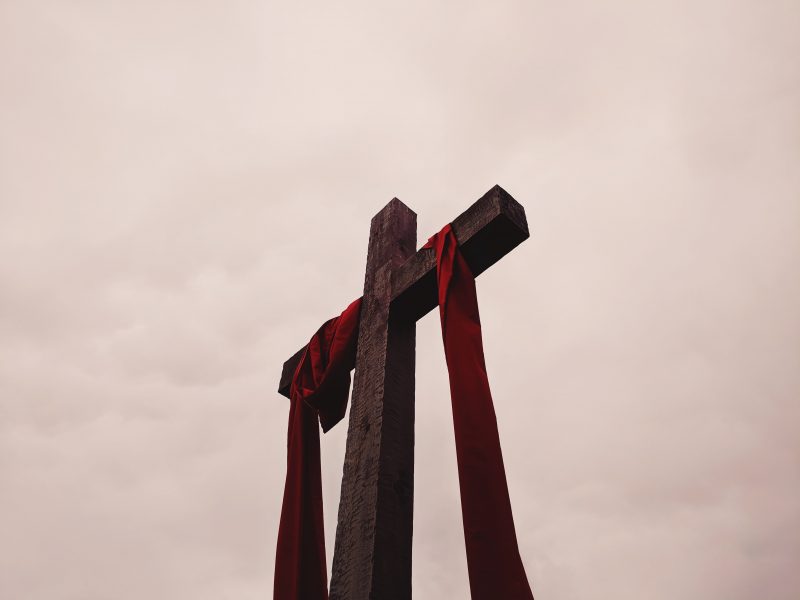 Sabbath. A holy day of worshipful rest. Today, the Jews mourned the death of Jesus.

Roman soldiers guarded the tomb where Jesus’ body lay, fearing His disciples may steal the body and claim He was raised from the dead.

This is also the day Judas Iscariot hanged himself from grief at what he had done.

The events of this day can be found in the gospels:

Take today as a day of restful worship. This is a weekly practice for me, personally, and one that is so life-giving. 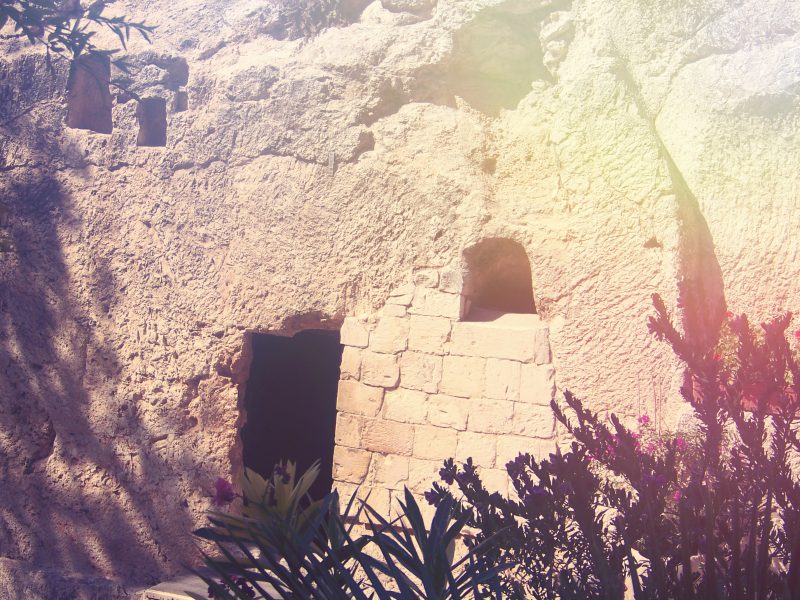 Imagine: You arrive at a tomb where Jesus’ body was laid. You watched Him die. You saw Him put in this tomb.

Yet, when you arrive, the stone has been rolled away, and the tomb is empty! Jesus is gone!

The most exciting event in all of Christianity is documented in all of the gospels.

I’ve gathered a few fun Easter crafts for kids to help commemorate the significance and meaning of Easter Sunday. 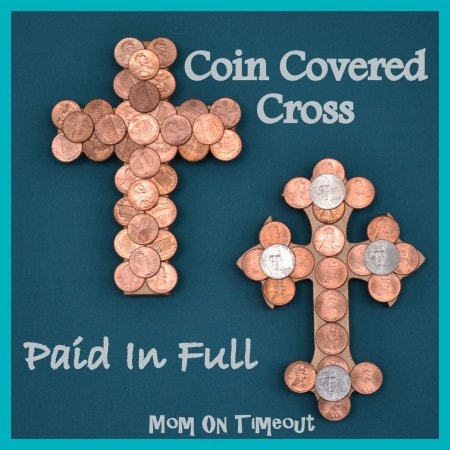 Grab some pennies and make these Coin Covered Crosses to signify Jesus paying for our sins in full. CLICK HERE for tutorial. 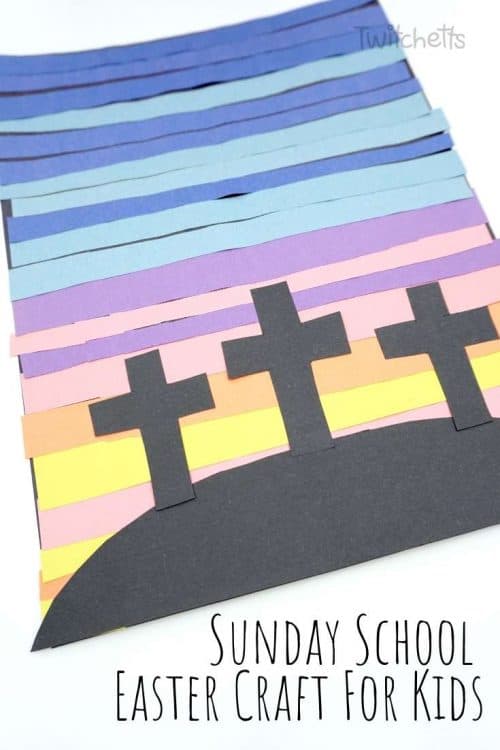 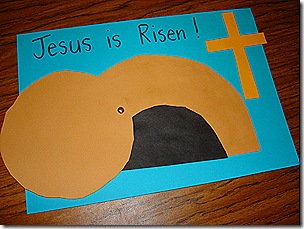 Read the scriptures of the empty tomb while your kids make their own empty tomb. He is risen!

Thank you for celebrating Holy Week with me! This is a precious time in the life of a believer, one in which we get to reflect on, and celebrate, the faithfulness of God and the ultimate sacrifice of His Son Jesus Christ, paying the penalty for our sin.

Without the resurrection, there is no Messiah. This is the foundation of our Christianity.

I pray that, even if you are unable to spend Easter physically attending church, you can still make Holy Week a memorable and meaningful experience for your family.