It has taken me years to create a daily Bible study habit. Some days, I only have time for a short study using my Write the Word journal. But on the days when I have time to dig in - those are my favorite times. I am not a Bible expert, but I love deep Bible study, so today I want to share with you my in-depth Bible study method. 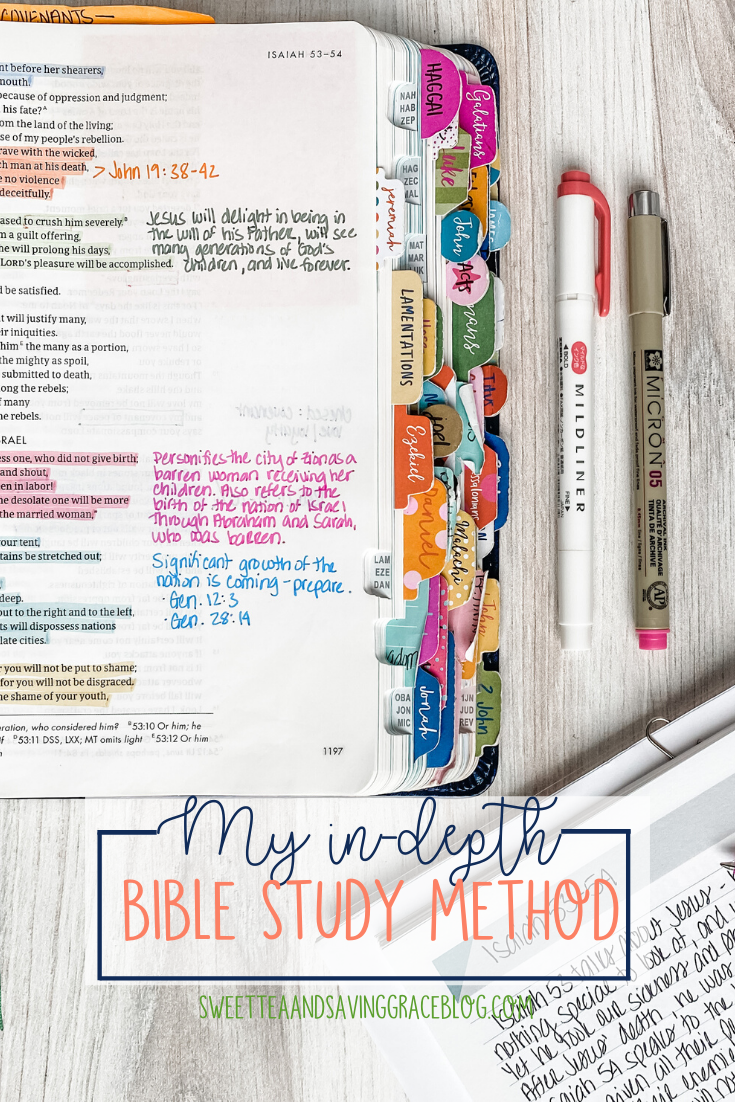 Before I can dig into my in-depth Bible study, I have to prepare – knowing what I’ll be studying and having all of my study tools at the ready.

Pick a Topic or Set of Scriptures

Before you can spend time digging into scripture, you need to know what you’re going to study. For me personally, I rarely use a formal Bible study (like those books you might use in Sunday class or with a group). Instead, I usually have a topic or scripture that God has placed on my heart, or I will follow a reading plan.

There are thousands of free Bible reading plans on the Bible app. I’ve also got a reading plan that I created called “Foundations of the Bible“, which will give you an overview of the entire story of Jesus. 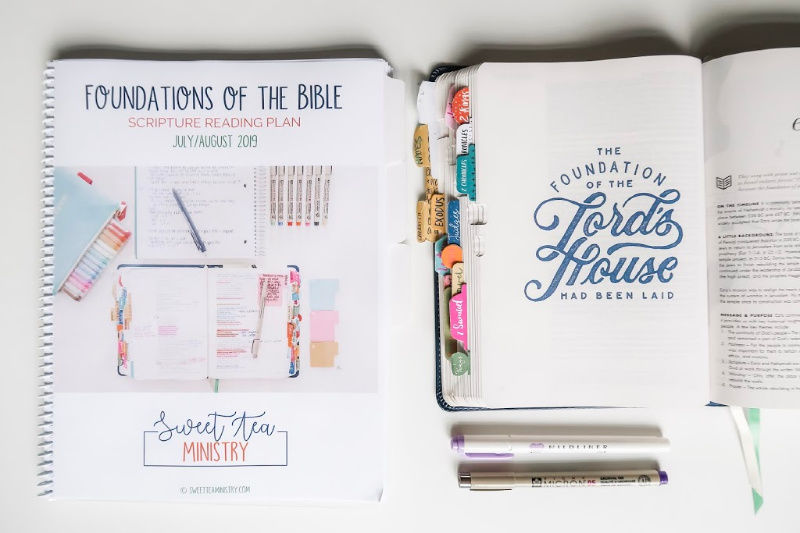 NOTE: You can absolutely deeply study one verse or set of scriptures on one particular day, then move on to a different topic or scripture the following day. However, I personally prefer to deeply study the same topic or related verses over the course of several days or weeks, giving me a broader picture of what I’m studying.

*Note: This post may contain affiliate links. Thank you for your support of Sweet Tea & Saving Grace!

Have Your Bible Study Tools Handy

If you’re going to do in-depth Bible study, I highly recommend using an actual Bible, rather than the app on your phone.

My Bible of choice is the She Reads Truth Bible. I love the CSB translation, and this particular Bible has space in the margins for me to take notes. 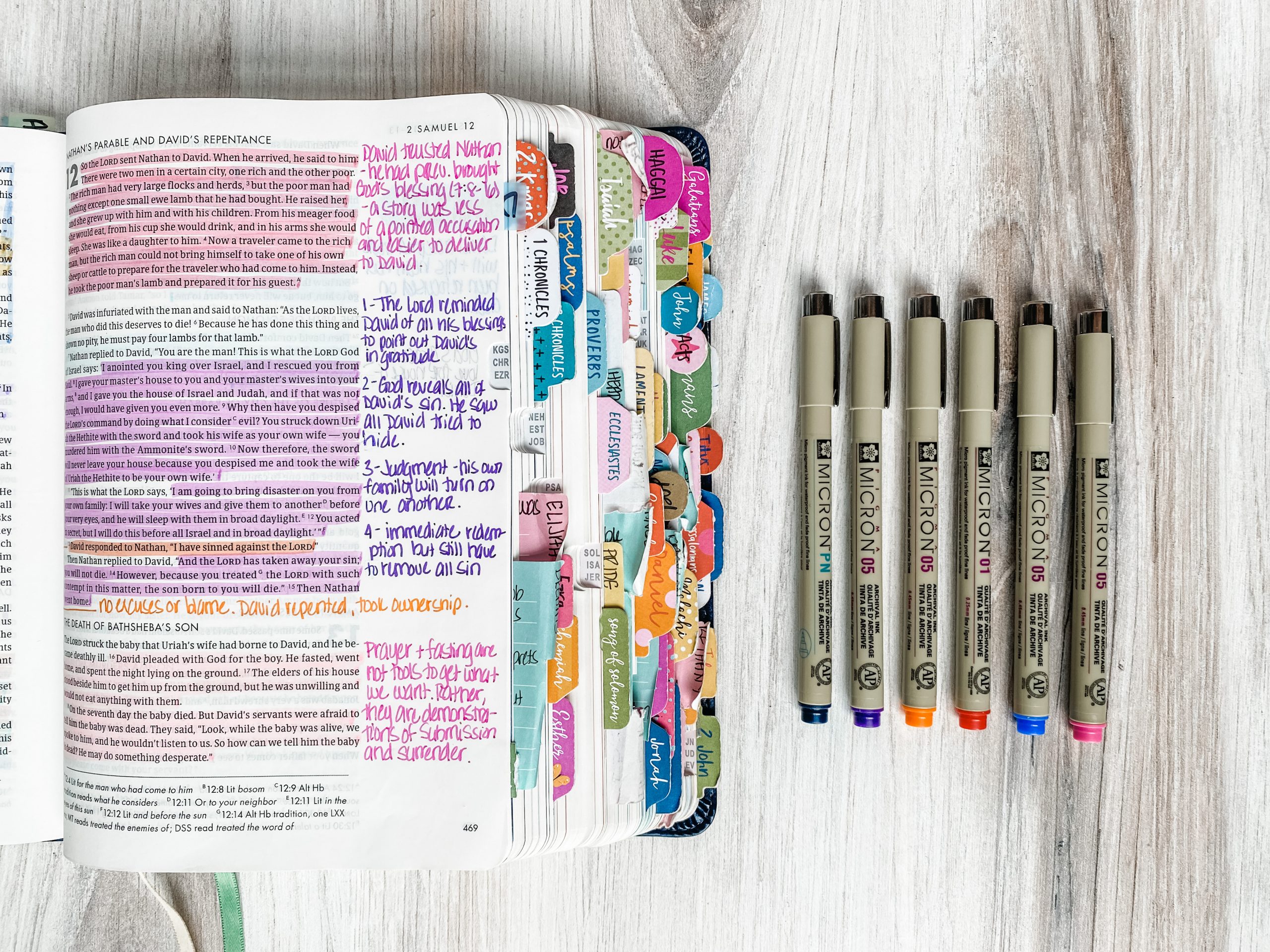 I also have my notebook and InkJoy gel pens for note-taking, and my Pigma Micron pens and Zebra Mildliner highlighters for marking in my Bible, as well as post-it notes and notecards.

Now that I know what I’ll be studying, and have my Bible and Bible study tools ready, it’s time to dig in.

Read Once, Then Read Again

I always read my selected scripture at least twice before taking any notes. It goes like this:

I also like to read it out loud whenever possible. Hearing it as I read it always helps me further comprehend the text, helping with tone, inflection, etc. 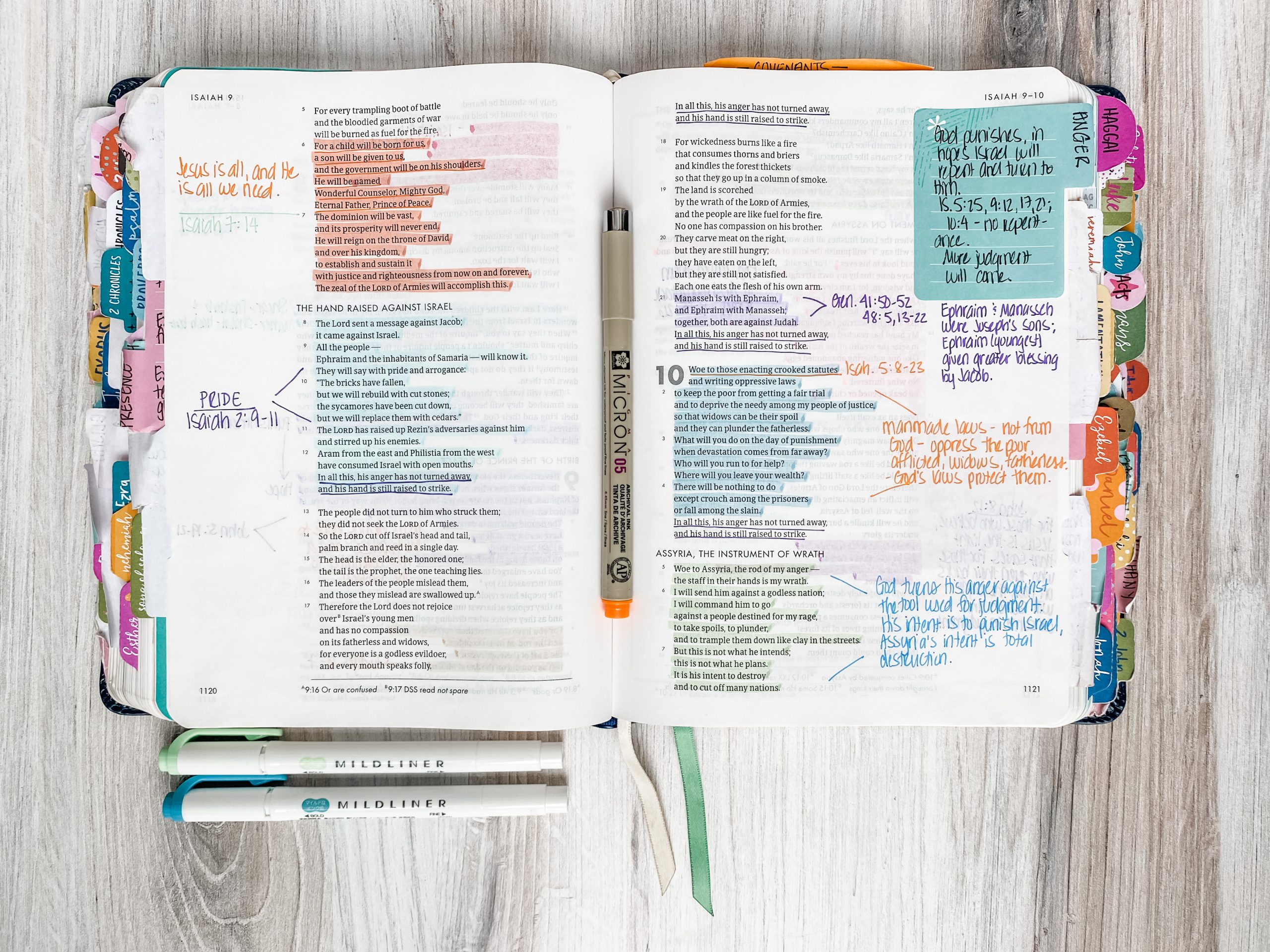 Now it’s time to start taking notes. This process looks different every single time I study, because I allow the scriptures and the Holy Spirit to guide me, but I’ll do my best to explain what questions I ask myself as I study.

COMPREHENSION: What does the scripture say?

Remember doing reading comprehension in school, where you would read a short story and then talk about what it said? This is the same thing!

I like to write a summary of the scripture in my notes, in my own words. Let’s go over an example:

How happy is the one who does not walk in the advice of the wicked or stand in the pathway with sinners or sit in the company of mockers! Instead, he delights in the Lord's instruction and meditates on it day and night. He is like a tree planted beside flowing streams that bears its fruit in its season and whose leaf does not wither. Whatever he does prospers.

What does it say?

A person who lives in obedience to the Lord’s instruction avoids wickedness, sin, and mockery. The Lord satisfies him like a flowing stream to a tree, and his fruit is the fruit of the Spirit – a product of his obedience that is goodness and righteousness.

Comprehension is your interpretation of the scripture, writing what it says, without digging too deeply,

INTERPRETATION: What does the scripture mean?

This is typically where I start getting really deep. Interpretation can do many different ways. You can ask yourself:

What does this scripture mean to me?

I always start with the first question: “What does this scripture mean to me?” Let’s use the example above, Psalm 1:1-3.

To me, this is reminding me to consult God when making choices for myself and my family. His advice, and the guidance of the Holy Spirit, is the only guidance I need. I am reminded of the Lord’s blessing that comes from obedience, and that my obedience leads to future fruit. Just as any sin I give into affects other people, so, too, does my obedience.

This also leads me on a rabbit trail to Galatians 5:22-25, which is the scripture about the fruit of the Spirit. In my normal in-depth Bible study time, I might flip my Bible over there and study that scripture, too, or notate it in the margins next to Psalm 1:3 for future cross-referencing, which we will cover in a minute. 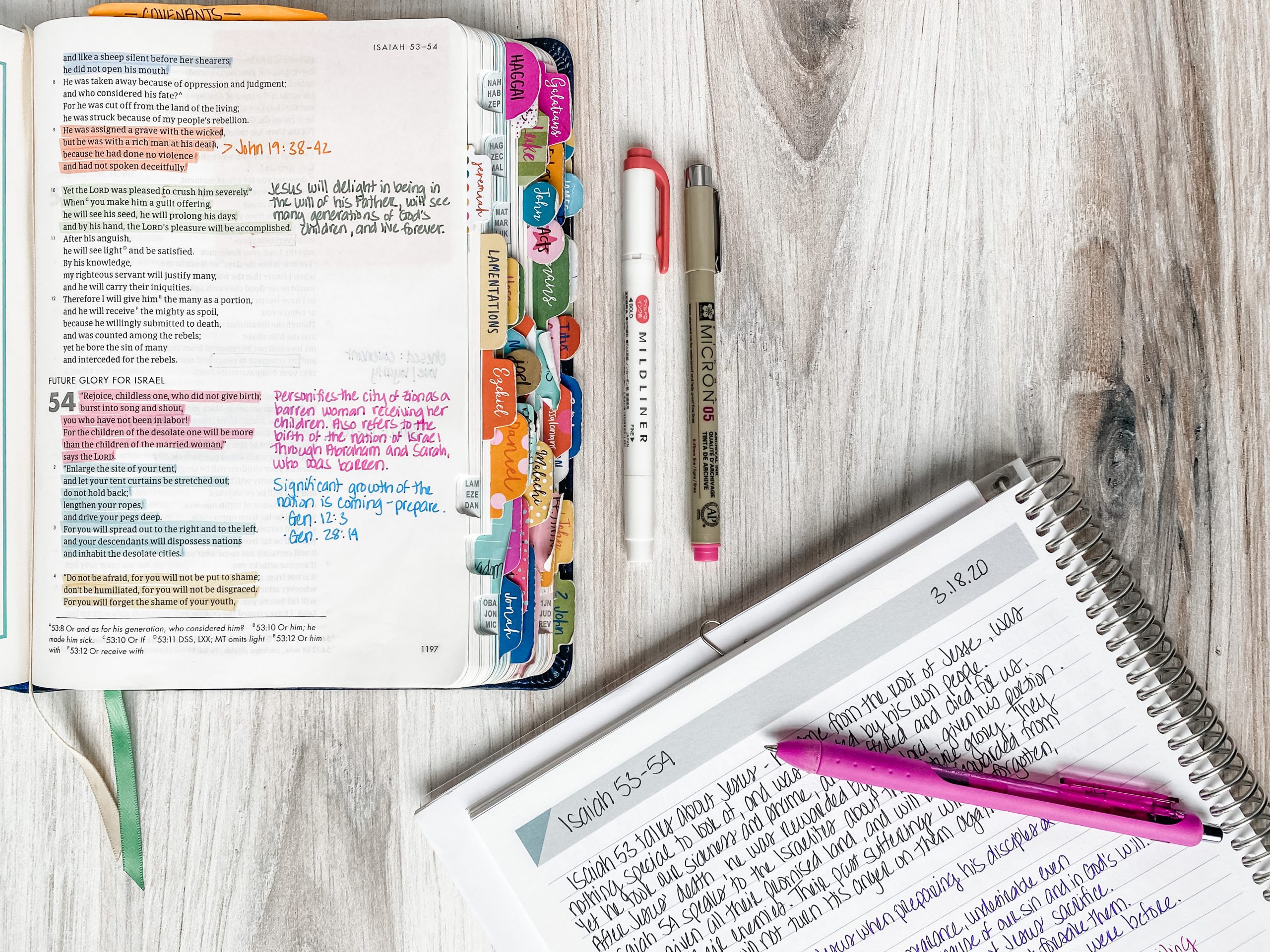 When you ask questions like “When was it written?” and “What was happening in the person’s life?“, you are getting into both the historical and cultural context of the verses, and this opens a door to reveal deeper meaning that you may not have ever thought about before.

Going back to Psalm 1:1-3, we learn that King David wrote these verses. In fact, he penned much of the psalms.

We know that David lived a mostly-obedient life. He was chosen by God to be the King of the Israelites after Saul, he was blessed by God as a conquering warrior, and was given wealth and victory.

However, David turned his eyes away from God to lay them on a woman named Bathsheba. He watched her bathe on her rooftop, invited her over, slept with her, and she became pregnant. To cover his sin, he had her husband killed while fighting on his behalf.

The Lord saw his sin, took the child from David, only to eventually give him another son with Bathsheba – Solomon, who would become king after his father, David, passed away.

How happy is the one who does not walk in the advice of the wicked or stand in the pathway with sinners or sit in the company of mockers! Instead, he delights in the Lord's instruction and meditates on it day and night. He is like a tree planted beside flowing streams that bears its fruit in its season and whose leaf does not wither. Whatever he does prospers.

Knowing David’s history unlocks a deeper meaning to these beautiful words, doesn’t it?

APPLICATION: How can I apply this to my life?

The final question I ask myself is, “How can I apply this to my life?”

This is important because the Bible isn’t supposed to be a book of information, it’s a book of transformation. We should approach Bible study as a time of learning how to live more like Christ.

So my notes for Psalm 1:1-3 may look something like this:

Scripture memorization, for starters. I need to keep my notecards with verses written on them handy, and reference them throughout the day. I already start my day with Bible study; perhaps I also read a little bit of scripture before bed, too.

I could go on, but you get the idea.

During the “Interpretation” time of my study, I utilize various resources to help me dig deeper into scripture.

Examples: for, therefore, if/then, in the same way​

Names of God and Jesus

Pay attention to the terms used to describe God or Jesus, or the specific name of God used.

Whether in the passage you’re currently studying, or throughout the Bible, write down repeated words and phrases and study their meaning.

For example, there are several numbers used often in significant times throughout the Bible, such as the numbers 7, 10, and 40. Also, the use of certain metals, such as bronze and gold, are significant, as is the use of cedar in building materials.

Lists of Names or Items

It’s perfectly normal to come across something in scripture that you don’t understand. Use a Biblical dictionary to write down definitions or terms you are not familiar with. 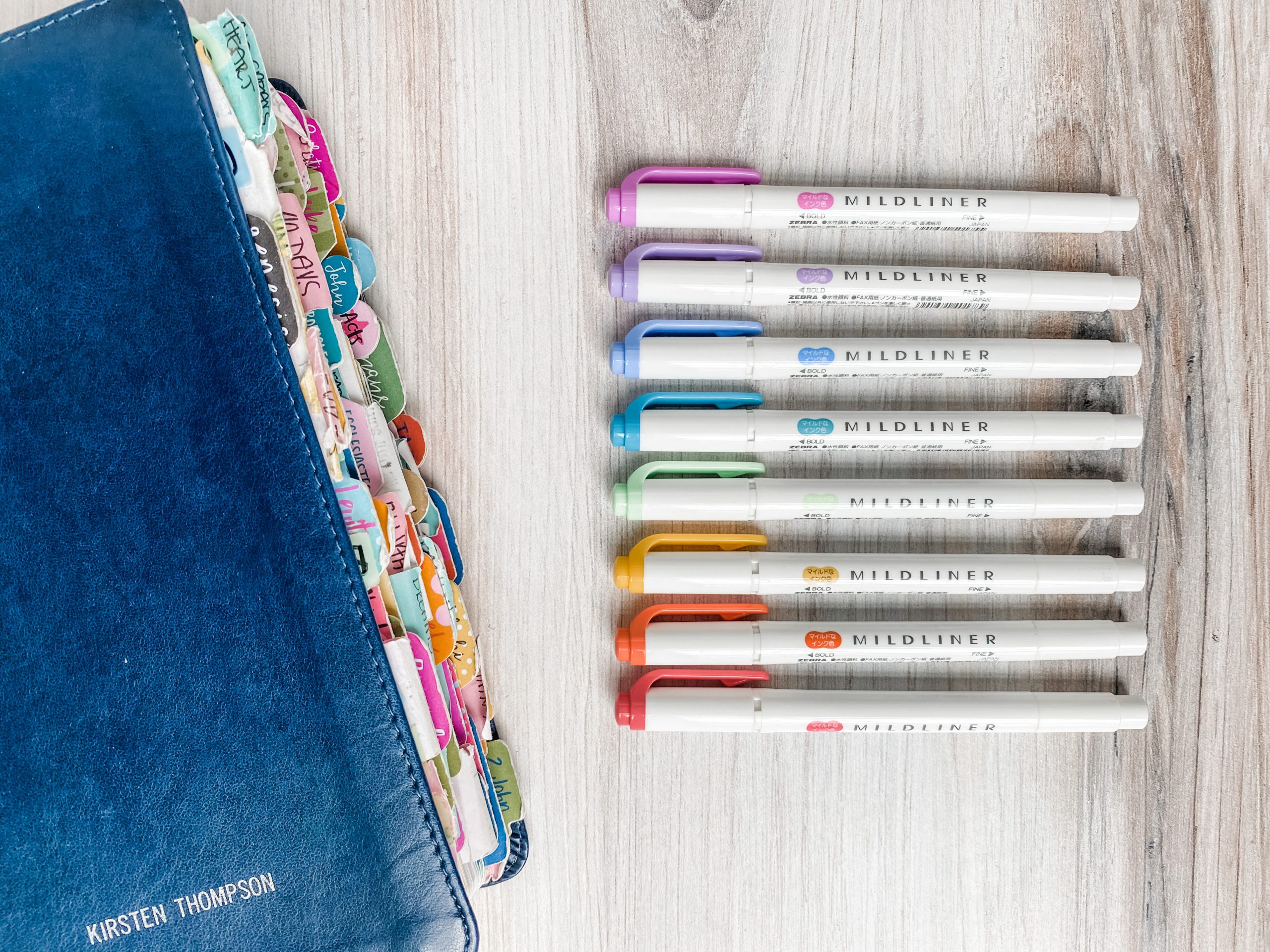 Earlier, I mentioned that the mention of a tree bearing its fruit in Psalm 1:3 reminded me of the fruit of the Spirit in Galatians 5:22-25. This is a cross-reference, and helps me see not only a deeper meaning to the original verses of study, but also connect scripture together, further acknowledging it’s one-ness as a full and complete work authored by God.

Some Bibles will have cross-referenced verses in the margins or footnotes. If your Bible does not have this, you can use tools like the Bible app, Logos app, Enduring Word, or others to help you find related scripture.

There are countless commentaries available in print and online. Just remember, these are other people’s interpretations of scripture, so use your best judgment. I personally love using the Enduring Word app for their commentaries.

IMPORTANT NOTE: Be careful any time you go outside of the Word of God for help in understanding scripture. Commentaries, and even footnotes, can provide a lot of help, but are opinions, or someone else’s viewpoint. Keep an open mind, and when in doubt, always go to God and seek the guidance of the Holy Spirit.

I keep asking that the God of our Lord Jesus Christ, the glorious Father, may give you the Spirit of wisdom and revelation, so that you may know him better.

Foundations of the Bible 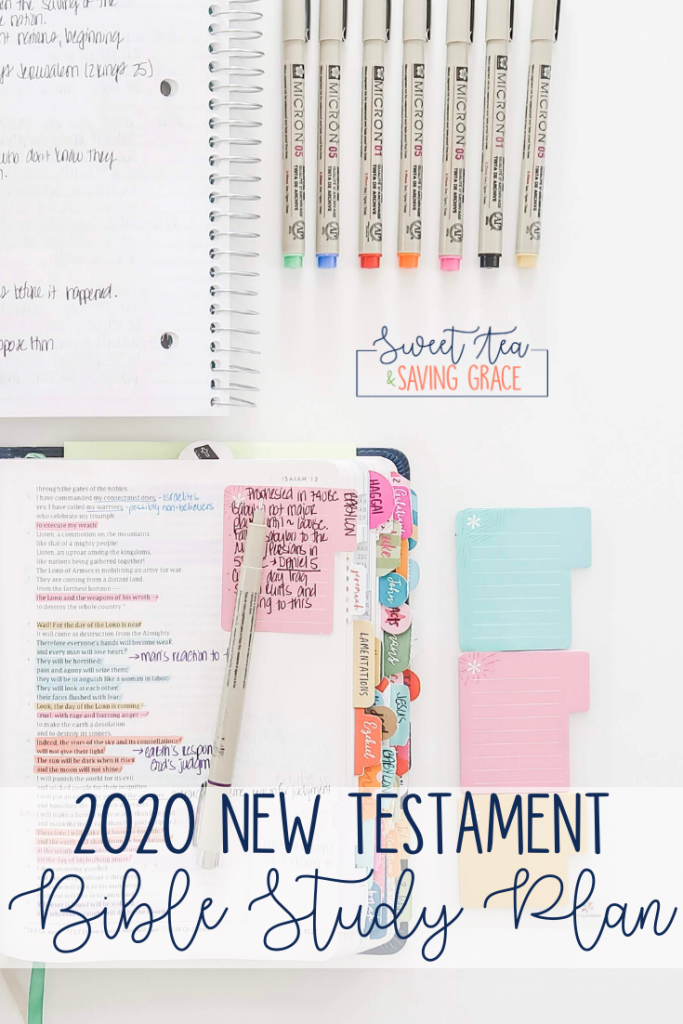