Chronologically, we’re moving from Genesis to Job where we meet Job, a man of high integrity, whose faith is tested when God removes His protection and allows Satan to control various aspects of Job’s life, causing him much hardship and pain. 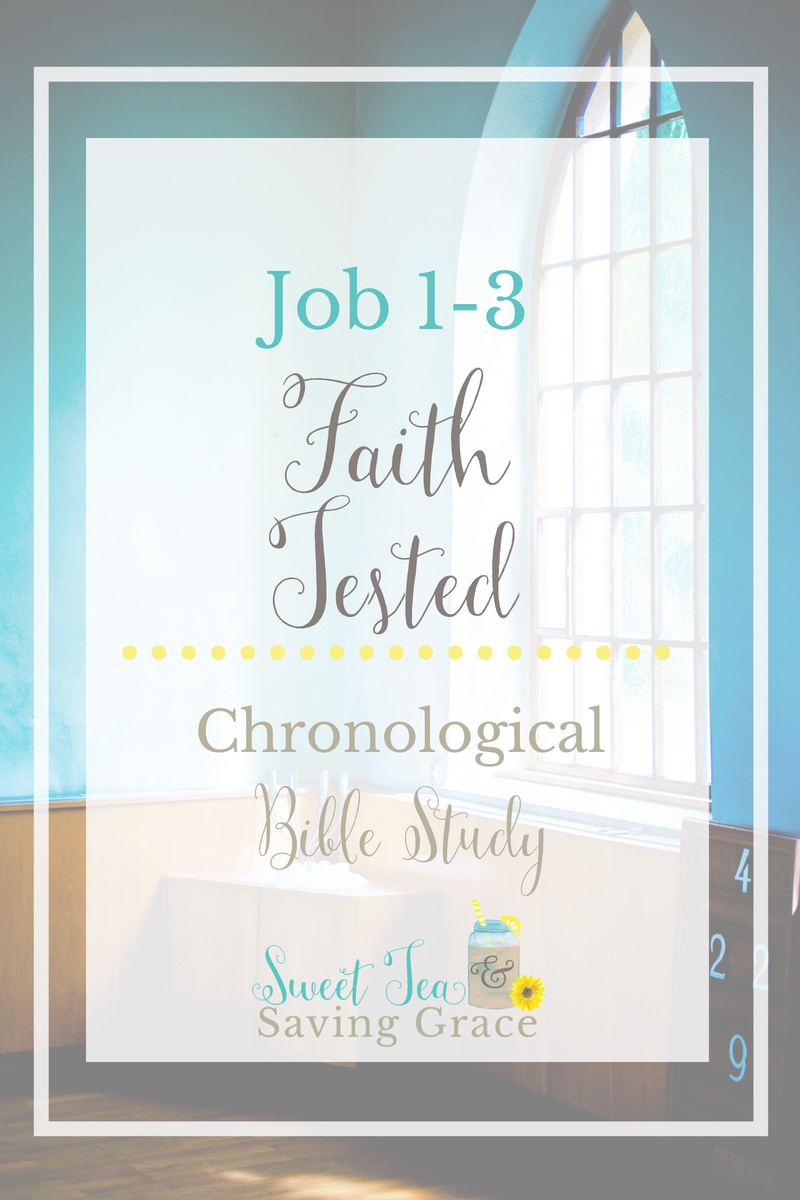 The book of Job takes place on the Arabian Peninsular in the land of Uz between 2100-1900 BC, roughly. It may have been written by Job himself, and is the first poetic book in the Hebrew bible. Much of the book of Job is dialogue. We will study the book of Job a bit differently than we studied the first 11 chapters of Genesis. Rather than going verse by verse, we will look at each chapter as a whole.

‘There was a man in the country of Uz named Job. He was a man of perfect integrity, who feared God and turned away from evil. He had seven sons and three daughters. His estate included 7,000 sheep, 3,000 camels, 500 yoke of oxen, 500 female donkeys, and a very large number of servants. Job was the greatest man among all the people of the east. ‘ Job 1:1-3

In the first three verses we learn a lot about the man named Job:

Within the first chapter of Job, we discover the type of man Job was, we see his role as a father who cares deeply for his children, we see the protection God has placed on Job and his family, and we see the devastation that came when that protection was removed.

But above all else, we see a devout man who loves God and has complete and total faith despite his many, many hardships.

‘Whenever a round of banqueting was over, Job would send for his children and purify them, rising early in the morning to offer burnt offerings for all of them. For Job thought: Perhaps my children have sinned, having cursed God in their hearts. This was Job’s regular practice.‘ Job 1:5

Job’s children were very close and celebrated with one another. As a loving father who was also most likely the priest of his family, he would do his due diligence to protect his children spiritually by offering burnt offerings and praying for his children.

This doesn’t suggest Job’s children were overly sinful. It was merely Job’s way of trying to protect his children from harm because he loved them.

Satan Given Limited Authority Over Job

‘One day the sons of God came to present themselves before the Lord , and Satan also came with them. The Lord asked Satan, “Where have you come from? ” “From roaming through the earth,” Satan answered Him, “and walking around on it.”’ Job 1:6-7

God decides to remove His protection from Job and gives Satan authority, but it is limited:

‘“Very well,” the Lord told Satan, “everything he owns is in your power. However, you must not lay a hand on Job himself.” So Satan left the Lord ’s presence.‘ Job 1:12

Tragedy #1: Sabeans took all of Job’s oxen and donkeys and killed all the servants by sword. (vs. 13-15)

Tragedy #2: Lightning destroyed all of Job’s sheep and servants. (v. 16)

Tragedy #3: Chaldeans took all of Job’s camels and killed all of the servants by sword. (v. 17)

Tragedy #4: A powerful wind collapsed the home of Job’s oldest son with all of his children inside, killing everyone. (v. 18-19)

Satan will take a strong foothold on whatever he can get and maximize his efforts. God gave Satan the authority over everything Job owned, and Satan took it all away in an instant.

From the perspective of Job or anyone around him, these incidents don’t seem related:

Satan used forces of nature because man assumes these things are “acts of God”, and hopes we will blame God for the effects of such forces. Remember, Satan’s sole purpose was to turn Job from God.

‘Then Job stood up, tore his robe, and shaved his head. He fell to the ground and worshiped, ‘ Job 1:20

Despite losing everything he owned, even his ten children, Job “fell to the ground and worshiped”. I can only imagine the look on Satan’s face when Job did this instead of cursing God for all of the things that just happened after a blessed lifetime.

Job recognized that all things come from God and all things can be taken away. Through all of this, Job never sinned or blamed God.

Satan sees that it will take much more to break Job, so he again goes back to God. This time, Satan says a man will break when his life is in danger, so God extends Satans authority to Job’s physical condition, but again places limitations on his authority – he cannot kill Job.

‘So Satan left the Lord ’s presence and infected Job with terrible boils from the sole of his foot to the top of his head. ‘ Job 2:7

In Deuteronomy 28:27, God cursed Israel with boils. It is very possible Job and those around him saw his boils as a curse from God as well. Again we see Satan use something God has used, making us think God is the cause of our problems.

Imagine being Job’s wife. She was living the high life – ten children, a husband with great wealth and integrity, lacking for nothing. Within one day, everything they own is taken from her. All of her servants are killed. And to add to her pain, all of her children have died in a horrible “accident”.

Now, she sees her husband writhing in pain, suffering from boils over his entire body. Her plea for Job to “curse God and die” was one of desperation and emotional suffering. She is probably angry with God and angry with her husband, thinking somehow his sin caused all of this. Perhaps if he were to just curse God and die, all of her misery would cease.

Job does not waver, however.

‘“You speak as a foolish woman speaks,” he told her. “Should we accept only good from God and not adversity? ” Throughout all this Job did not sin in what he said. ‘ Job 2:10

Job cannot, in fact, die, even if he wanted to, because God has placed that limit on Satan’s authority.

Hearing the news of the tragedies that have occurred in their friend’s life, Eliphaz, Bildad, and Zophar travel from their homes to see Job and offer comfort.

‘When they looked from a distance, they could barely recognize him. They wept aloud, and each man tore his robe and threw dust into the air and on his head. ‘ Job 2:12

Job was in such bad shape that his friends barely recognized him. They were so distraught over the sight of their suffering friend that they tore their robes and threw dust onto their heads.

Upon arriving at Job’s side, the three friends sat in silence for a period of seven days.

Finally, after seven days, Job speaks, cursing the day he was born for 24 verses. We can break his speech into three distinct parts:

Job Curses the Day of His Birth

In verse 1-10, Job curses the day he was born and wishes the actual day itself could be erased from the history of the world, eradicated from the calendar…UNCREATED.

‘If only darkness had taken that night away! May it not appear among the days of the year or be listed in the calendar. ‘ Job 3:6

Job speaks of the hedge placed on him by God in verse 10. The hedge that once protected him now holds in his suffering.

Job Questions Why He Lived

After lamenting his birth, in verses 11-19, Job questions why he didn’t simply die at birth or be stillborn.

He would be free from suffering now if only he had died at birth.

In these verses, it’s important to note that, as a believer, Job acknowledges that death is not the end. He would be resting in peace “with the kings and counselors of the earth” (v. 14).

In verses 20-26, Job offers a series of questions to which there are no answers. He questions “why” over an over, wondering why a man who suffers so much and just wants death cannot die.

Not once in the entirety of his speech does Job blame or curse God.

PrevPreviousGenesis 10-11: Table of Nations and Tower of Babylon
NextLearning Contentment from the BirdsNext