A Day Trip to Detroit

Nothing says ‘summer’ quite like baseball, hot dogs, and cold beer, right?!  One of the items on our Summer Bucket List was to take in a Detroit Tigers baseball game at Comerica Park, and we were able to check off that item this past weekend. 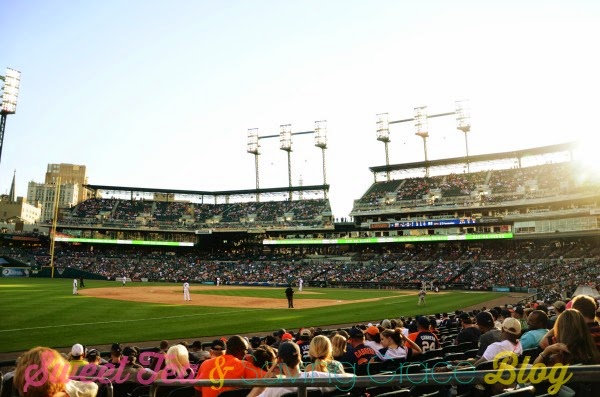 We are very blessed that my husband works for a major airline, which grants us awesome flight privileges, and we try to take advantage of those privileges when we get a chance.  {Even though it’s usually a huge hassle to fly anywhere these days….thank you stand-by list and TSA agents.}
I digress… 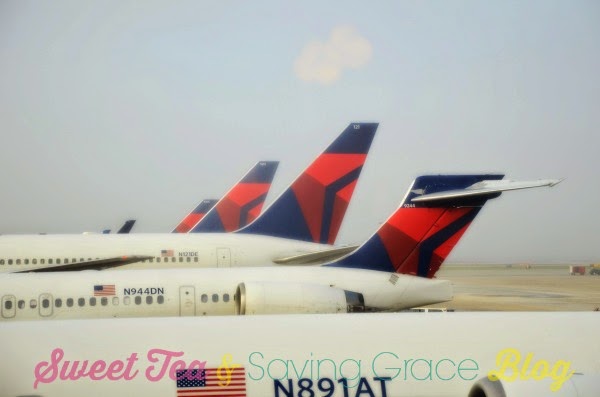 Last Saturday, we headed to the Atlanta airport at the butt-crack of dawn (not even kidding – 4:30am folks) to try to catch the first flight to Detroit.  Unfortunately, we didn’t make that flight, but we were able to get a flight into Grand Rapids only a couple hours later, which actually worked out better since our family who joined us was driving from Grand Haven and passing right through Grand Rapids! 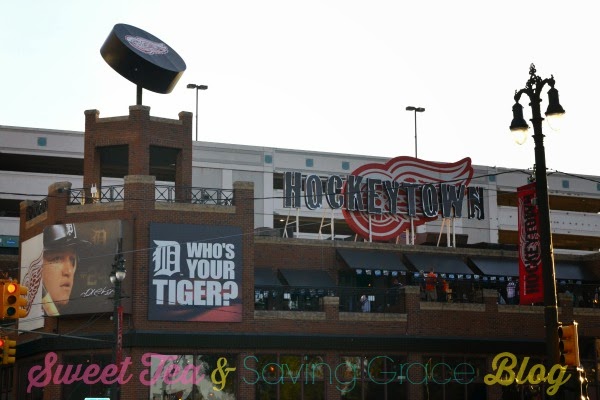 After an uneventful flight {the best kind, if you ask me} and a couple hours in the car, we arrived in Detroit! Our first stop was Hockeytown Cafe in the heart of Detroit, directly across the street from Comerica Park. Let me just tell you, my Michigan man was all but salivating at the mouth with the awesomeness that is Hockeytown Cafe. 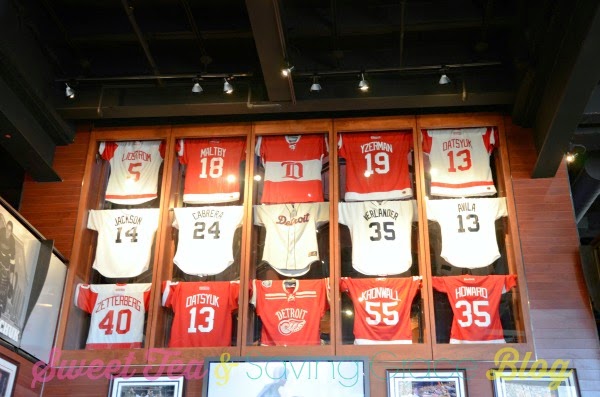 Covered floor to ceiling with Red Wings and Tigers paraphenalia, Hockeytown was oozing authentic Detroit charm.  We loved every minute of it! 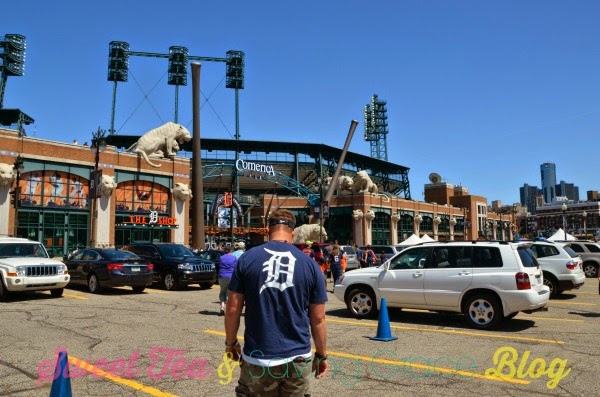 After a cold beer, it was time to head to Comerica Park to watch our Tigers take on the Minnesota Twins. This was our first time at Comerica Park, and we were both super excited.  Just walking up to the front gates will get anybody’s blood pumping.  Look at those gigantic tigers looking down on the fans!! 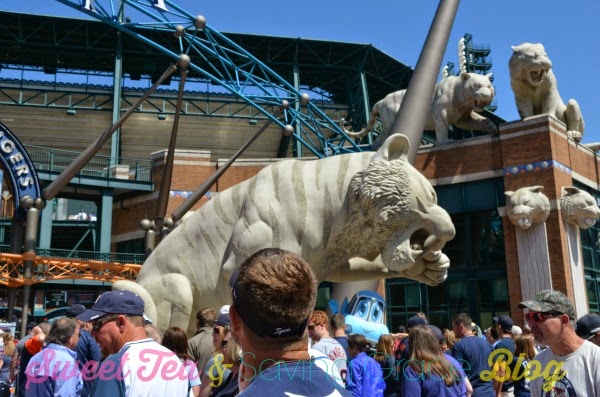 The Big Tiger stands about 15 feet tall and sits at the center of the main entrance.  There are several other big tigers postured at the entrance as well. 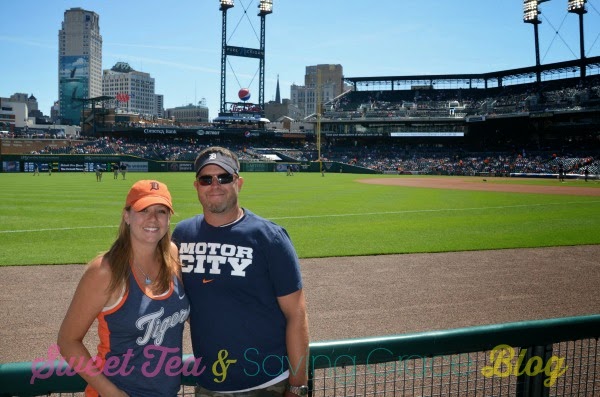 I’ve grown up around baseball, attending games at baseball parks all over the country, including Oriole Park at Camden Yards, Turner Field (Atlanta Braves), AT&T Park (San Francisco Giants), Fenway Park (Boston Red Sox), and Dodger Stadium.  I can honestly say, though, that never in my life have I seen a baseball stadium as awesome and beautiful as Comerica Park. 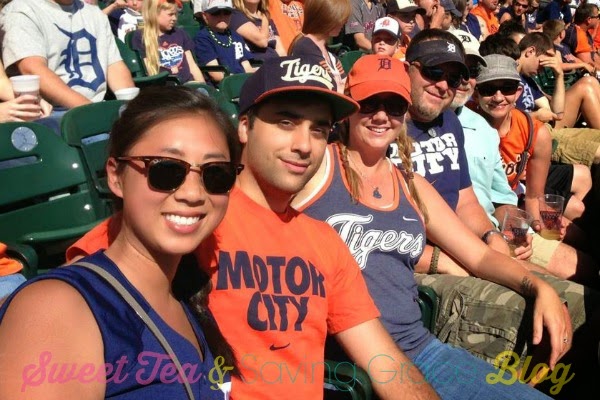 Our seats were sixteen rows up from the field, right down the third base line.  Despite Mark reminding me at least two dozen times that we were in “foul ball alley”, none actually made it our way.  I kept telling him that was only because our Tigers were too busy hitting the ball deep into center field! 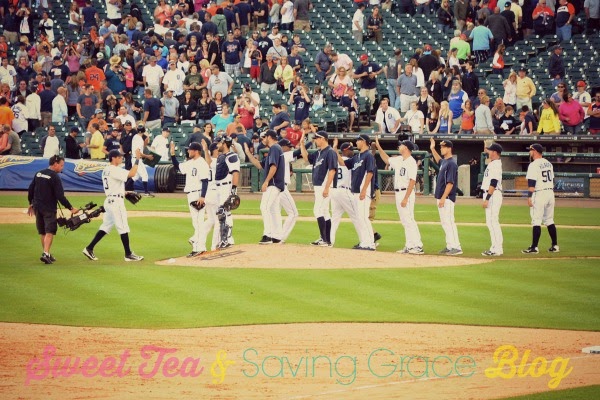 After taking a commanding 11-1 lead going into the seventh inning, the Tigers allowed six runs in two innings and had to fight to stay ahead, finally taking the victory with a 12-9 win over the Twins.  {We were getting a little worried there at the end, folks.} 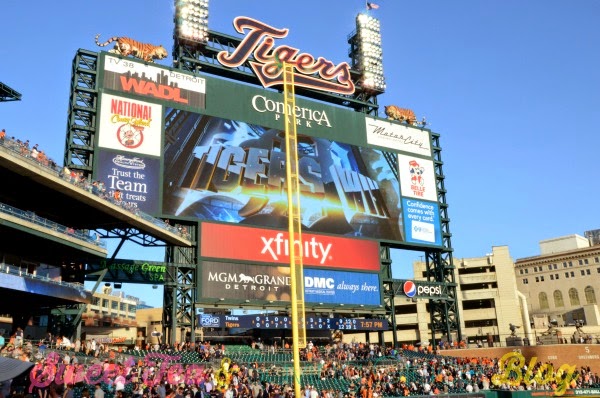 It was such an awesome experience!  Eugenio Suarez came only a single away from hitting for the cycle, Magglio Ordonez was attending the game in one of the suites, and I had one of the best hot dogs ever.  Seriously y’all, my dog had baked beans, shredded Cheddar chesse, and bacon bits on it.  {You better believe I’ll be recreating that bad boy at this year’s 4th of July cookout!}

If this was the only thing we do all summer, it’s enough.  It was phenomenal, and I’m so glad I got to enjoy it with Mark and our Michigan side of the family.  This most definitely makes the highlight reel.