What Paul Can Teach Us About Our Calling

In the book of Acts, we meet a man named Saul, persecutor of Christians, a man who participated in the martyrdom of Stephen, highly regarded by the high priests. Essentially, Saul was a hitman or bounty hunter. That same man met Christ one day, and received his calling into ministry. The apostle Paul can teach us a lot about our own calling. 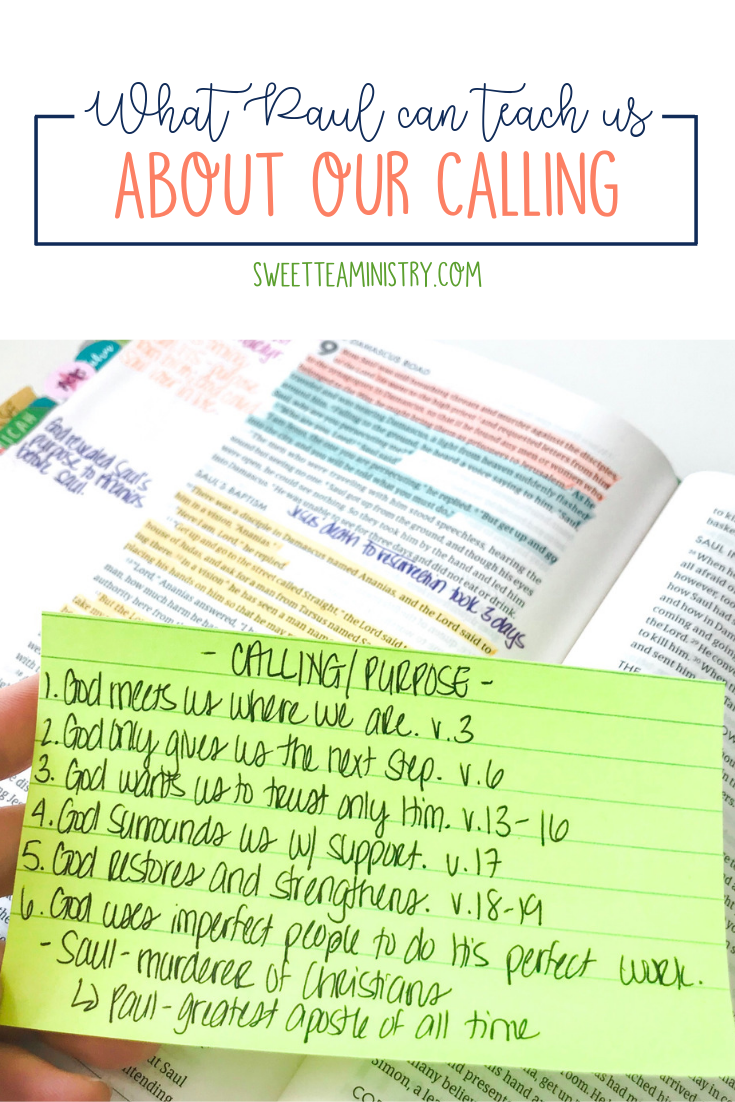 We meet Saul for the first time about 25-30 years after Christ died on the cross, was resurrected, and ascended into heaven after appearing to His disciples and giving the Great Commission.

How we are introduced to Saul is very interesting:

Saul agreed with putting [Stephen] to death. On that day a severe persecution broke out against the church in Jerusalem, and all except the apostles were scattered throughout the land of Judea and Samaria. Devout men buried Stephen and mourned deeply over him. Saul, however, was ravaging the church. He would enter house after house, drag off men and women, and put them in prison.

Right away, we get a picture of the man Saul was. He agreed with the murder of Stephen, a man of God, follower of Christ. He had no remorse, for as Stephen’s friends were burying him, Saul was pulling men and women from their homes and putting them in prison, simply for believing in Christ.

Our next encounter with Saul is one that changed his life forever, and this singular event also changed the future of the church.

As he traveled and was nearing Damascus, a light from heaven suddenly flashed around him. Falling to the ground, he heard a voice saying to him, "Saul, Saul, why are you persecuting me?" "Who are you, Lord?" Saul said. "I am Jesus, the one you are persecuting," He replied. "But get up and go into the city, and you will be told what you must do."

Saul and his men were heading to Damascus to the synagogues in order to arrest more Christians and sentence them to death. He had letters from the high priests giving him all the authority he needed.

And this is where he meets Jesus.

Important Note: In verse 5, Saul asks, “Who are you, Lord?” In this time, “lord” was similar to us greeting a man with “sir”. Initially, Saul didn’t recognize the voice as that of Jesus, which is why Jesus then identified Himself in His response to Saul.

As we read on, we see that, when Saul stood up, he was blind, and had to be led into Damascus. He remained blind for three days and did not eat or drink. (Acts 9:8-9)

There was a disciple in Damascus named Ananias, and the Lord said to him in a vision, "Ananias." "Here I am, Lord." he replied. "Get up and go to the street called Straight," the Lord said to him, "to the house of Judas, and ask for a man from Tarsus named Saul, since he is praying there. In a vision, he has seen a man named Ananias coming in and placing his hands on him so that he may regain his sight."

And God told Ananias not only to go visit Saul, but to place his hands on Saul in order to restore his sight.

Ananias expresses his fear to the Lord, saying that he has heard about Saul and knows his authority in Damascus to persecute Christians.

But the Lord said to him, "Go, for this man is my chosen instrument to take my name to Gentiles, kings, and Israelites. I will show him how much he must suffer for my name."

Ananias goes to meet Saul, does as the Lord commanded, and restored Saul’s sight. Saul was then baptized, and spent some time with the disciples before traveling on many missions sharing Christ with others.

6 Things We Learn About Our Calling From Paul

Saul went from a well-known and highly respected persecutor of Christians to Paul, the greatest apostle of all time, helping to create the Catholic church, and authoring 13 books of the New Testament.

God had a calling for Paul, just as He has a calling for each of us. Paul’s story tells us more about God and His calling on our lives.

Acts 9:3 tells us that God met Paul while he was on the road to Damascus. Saul was on a mission to stop the spread of Christianity. Instead, God used him to help Christianity spread around the world.

No matter where we are in our lives, and no matter what sin we have committed, God will meet us where we are, in His time, because He has a calling for our lives.

#2 - God only gives us the next step, not the whole plan.

When Jesus spoke to Paul, He didn’t say,

Could you imagine how crazy and overwhelming that would have sounded?

Instead, Jesus said, “But get up and go into the city, and you will be told what you must do.”

God requires faith. We have to trust Him completely, sometimes taking blind steps, as Paul did, toward the unknown. We have to trust that God has everything under control, and will reveal the next step when we need it.

When the Lord spoke to Ananias, Ananias responded in fear based on what he had heard from other people about Saul. He said, “I have heard from many people about this man, how much harm he has done to your saints in Jerusalem.”

The Lord responded by basically telling Ananias to choose in whom he trusts – other people, or Him.

Many times, our calling may seem crazy to those around us, including our closest friends and families. God wants us to trust only in Him, not in the opinions of others, or in our own hesitations.

#4 - God surrounds us with support.

Was God capable of restoring Paul’s sight on His own? Of course! So why send Ananias?

God sent Ananias to heal Paul, giving Paul a built-in friend and ally. He then sent Paul to live with the disciples for a while, surrounding him with both education of the Christian faith, and support for his missions.

God will never make us walk alone. He will always put the right people in our path to help us live out our calling.

When Ananias laid his hands on Paul, verse 18 says, “at once something like scales fell from his eyes, and he regained his sight. Then he got up and was baptized.” He then ate and regained his strength.

When we willingly accept God’s calling on our life, God restores us and gives us strength.

#6 - God uses imperfect people to do His perfect work.

Over and over again in scripture, we meet ordinary or even extraordinarily bad people who are the most unlikely candidates for God to use for His kingdom.

But time and again, we see God doing just that, just like He used Paul.

Paul went from persecutor of Christians to the greatest apostle of all time. The death of Jesus washes away ALL sin for ALL people, not just some sin for some people.

We may think we are beyond saving, or we’ve done too many bad things in our lives for God to love us and use us for His kingdom, but we are wrong.

There is no sin too big that it can’t be covered by the blood of Jesus.

Genesis 1: In the beginning God... 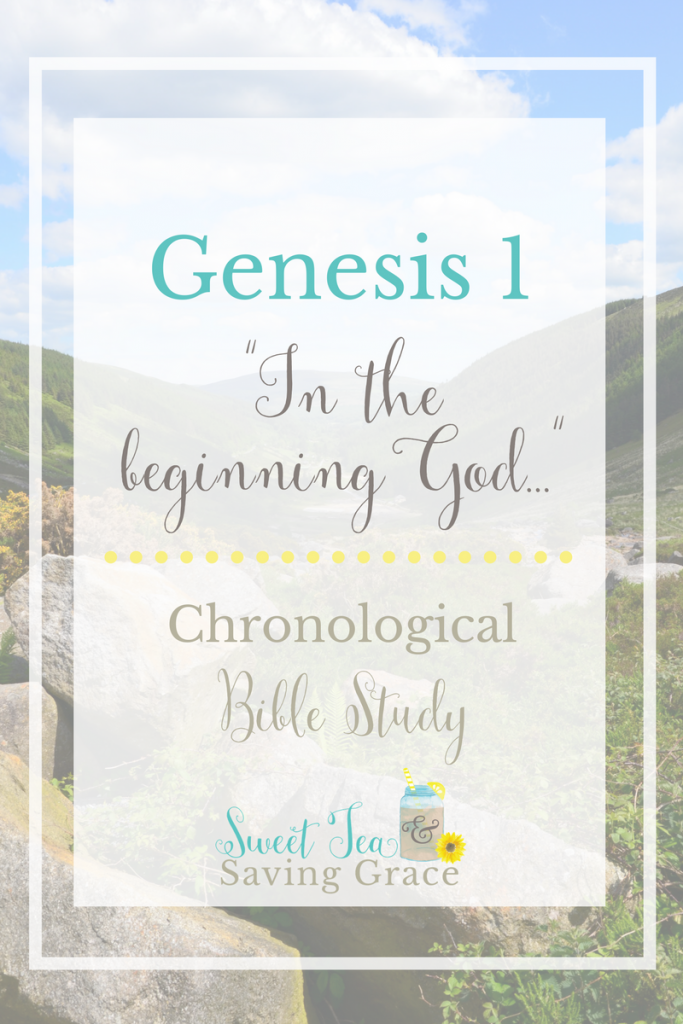 PrevPreviousAre We Called to Be Comfortable?
NextFoundations of the Bible Reading PlanNext